He made his name as the world’s most ingenious art forger. So when the Courtauld Institute of Art was presented with a copy of a Dutch Golden Age painting by the arch-counterfeiter Hans van Meegeren, the gallery’s director accepted the work as a fake of the highest order. Now, 50 years after The Procuress was deemed a forgery – albeit a brilliant one – it has proved to be a genuine 17th-century painting of the Dutch Golden period and may even have hung in the house of the Dutch master Johannes Vermeer.

This week, The Art Newspaper will reveal how the Courtauld acquired the work in 1960 when it was donated as a van Meegeren, duly accepting it as a rare offering from one of the most uniquely-gifted forgers of all time.

Van Meegeren was born in 1889 and set out to become an artist. But after critics decried his work as derivative, he felt they had destroyed his career and decided to prove his talent by forging the works of some of the world’s most famous artists, including Vermeer. He replicated the styles and colours of the Dutch Golden Age artists so exactly that critics and experts celebrated his work as genuine and utterly exquisite. He was exposed in 1945 after being accused of selling a newly-discovered Vermeer to the Nazi Hermann Goering.

His most successful forgery was a version of Supper at Emmaus – originally by the baroque painter Caravaggio – in the style of Vermeer, which he created in 1937. It was so convincing that it was hailed by art experts as the finest Vermeer they had ever seen.
The latest research at the Courtauld has revealed that The Procuress is a version of the 1622 brothel scene by the eminent Dutch painter, Dirck van Baburen, which is depicted in the background of two works by Vermeer. It is believed the Courtauld’s painting may be the work that once hung in Vermeer’s home in Delft.

According to a 1641 inventory, Vermeer’s mother-in-law, Maria Thins, owned "a painting wherein a procuress points to the hand" (the scene in the Baburen painting). She is believed to have brought the picture to Delft, where her daughter Catherina married Vermeer in 1653, and the family lived together. The Baburen original appears in two of Vermeer’s paintings: The Concert, painted in about 1664; and A Young Woman Seated at a Virginal, 1671.

The painting was presented to the Courtauld by Professor Geoffrey Webb, a specialist on historic architecture. He had been a senior arts officer in Germany just after the Second World War, and apparently received it in the Netherlands as a gift for helping with the restitution of works of art. He believed it was a Van Meegeren fake which had been recovered by the Dutch authorities in 1945 from the forger’s villa in Nice.
When Anthony Blunt, the then-director of the Courtauld, accepted The Procuress, few questions were asked. A few suspicious queries raised in the 1970s by the Dutch scholar Marijke van den Brandhof were not followed up, as all appeared convinced it was a product of the forger.

It was later lent to three exhibitions on fakes as a fine example of a forgery. Two other versions of The Procuress were thought to be the original until now. The first was owned by the Rijksmuseum in Amsterdam, but in 1949 another emerged from an English private collection. It was auctioned at Christie’s before being bought by Boston’s Museum of Fine Arts.
Scientific work at the Courtauld now confirms that the picture could date from the 17th-century. The canvas is old but more significantly, there is no evidence that modern pigments was used. Caroline Campbell, a curator at the Courtauld, believes it is "likely to be a 17th-century painting". She admits to being "surprised" at the results of the investigation, because it had originally been accepted as a van Meegeren.

The painting is not on view to the public due to its fragile condition, but may be viewed by appointment at the Courtauld. 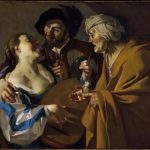 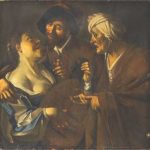 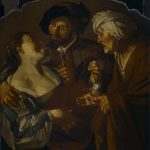