From 21 until 27 September, the annual CODART study trip was held in Helsinki and St. Petersburg. During the first two days in the capital of Finland, there were visits to the National Museum, which especially for the CODART-group, showed Dutch art from Finnish mansions, and to the Sinebrychoff Art Museum, where the visitors could enjoy the exhibition Joys of life: the golden age of Dutch and Flemish painting as well as the permanent collection of the museum.

In St. Petersburg, the Hermitage was intensively visited. The curators of the museum presented their collections with great enthusiasm and showed also paintings, prints and drawings from the storages, on special request of the participants. Among the other highlights of the program were visits to the Peter the Great Museum – Kunstkamera and the palaces of Peterhof, Pavlovsk and Tsarskoe Selo.

After the study trip, a Russian edition of CODART ”light” took place in Yasnaya Polyana – the estate of the famous Russian writer Leo Tolstoy (1828-1910), near Moscow. The meeting took place en marge of a seminar on digitization and collection registration, organized by the Amsterdam based Stichting Cultuur Inventarisatie (SCI, Foundation for Cultural Inventory) in cooperation with the Cultural Heritage Foundation and the Russian Association of Museum Professionals (AMR). The seminar was made possible with financial support from the Royal Netherlands Embassy in Moscow. Directors and curators of nine Russian regional museums with collections of Dutch and Flemish art took part in the seminar. Besides workshops on digitization, the Russian colleagues discussed their collections with three CODART-members: Bernard Vermet, Eric Domela Nieuwenhuis, and Norbert Middelkoop. This proved to be very fruitful. The Perm State Gallery also presented two relatively unknown paintings by Jacob Jordaens.

Finally, on 28 September the English edition of the first scholarly catalogue of Dutch paintings in the Pushkin State Museum of Fine Arts in Moscow was presented. The catalogue was the lifework of Marina Senenko, who passed away in 2006, at the age of 76. Irina Antonova, director of the Pushkin Museum, presented the first copy of the catalogue to Marina Senenko’s daughter Anna. Also this catalogue was an initiative of the SCI. It has been financed by the Dutch Ministry of Education, Culture and Science, the Prince Bernhard Cultural Foundation, and the Netherlands Institute for Art History (RKD), among others. The whole project could be realized thanks to the support of the Royal Netherlands Embassy in Moscow. 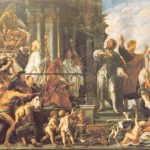 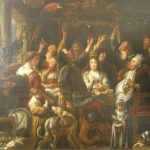