The Rijksmuseum has acquired an extremely rare Medieval chain from a marksmen’s guild, made in Bergen op Zoom or Breda. The silver chain from around 1525-1546, partly gilded and enamelled, is a wonderful example of the high quality silversmith masterwork from that period. The chain from the marksmen’s guild was once owned by the legendary French Rothschild family. The acquisition was made possible by a private donation.

The chain is richly decorated with oak branches and various symbols. The winner of the annual marksmen’s competition was entitled to wear the chain. In combination, it demonstrates to whom the work once belonged. Saint George and the Dragon refer to the patron saint of the marksmen’s guild, the seven rabbit mountains depict the name of the town where the guild was established: the city of Zevenbergen (“Seven Mountains”). The remaining symbols portray the task of the marksmen’s guild: to defend the Church and the State. The oak leaves represent “steadfastness in faith” and the birds represent “loyalty to Church and State”.

In the Middle Ages, in different parts of the Northern and Southern Netherlands, an important event was the annual so-called “jay shoot”. The competition included “jay shooting”: shooting a wooden bird from a tall pole with a bow and arrow. The winner of the competition was named “Marksman King” and was allowed to wear the chain on heydays. Each year the winner added his own coat-of-arms. Therefore, after some time, the chain was crammed with tiny shields. The current acquisition only has one shield left; from its namesake Cornelis de Glymes van Bergen, Lord of Zevenbergen. He was named Marksman King on 18 July 1546. The other shields have been lost over the centuries.

At the end of the 19th century, the chain disappeared from the Netherlands, to the frustration of the man involved in the construction of the Rijksmuseum, Victor de Stuers. He considered the sale an immense loss for Dutch heritage. At the time, the buyer was Alphonse James de Rothschild, owner of the renowned wine estate Château Lafitte. In 2014, his descendants took the chain to Christie’s in Paris where it was purchased by a private party who subsequently donated it to the Rijksmuseum.

To celebrate the return, the Rijksmuseum has put together a presentation of the chain in combination with works on paper. When comparing the design and execution of the chain from the marksmen’s guild with the elaboration of similar themes by artists such as Albrecht Dürer, Martin Schöngauer and Lucas van Leyden (all started their careers as silversmiths), it becomes clear that these different Medieval art forms were in fact, related to one another. 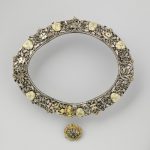 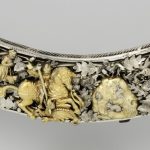 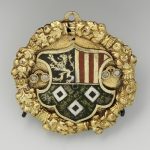