A newly acquired still-life by Joachim Beuckelaer has gone on display in the Metropolitan Museum of Art. The panel entered the collection of the Metropolitan in 2015 and has been in restoration until recently. Beuckelaer’s view of a daily fish market, which was only known through copies, can be enjoyed together with Christ Carrying the Cross by Jan Gossart, which is another recent acquisition by the museum.

Information from the curator, 5 April 2016

The Met has long been looking for a great work by Pieter Aertsen or Joachim Beuckelaer to represent the beginning of the genre of still-life painting in Flemish art. For the last seventy years in a Belgian private collection, Beuckelaer’s Fish Market was only known previously by two copies on canvas, which were published in the 1986 Museum voor Schone Kunsten (Ghent) exhibition catalogue devoted to the artist. Prominently signed, monogrammed, and dated 1568 at the lower left edge of the fishmonger’s wooden table, the painting boldly displays its bounty from the sea for the viewer. It is a magnificent still life of salmon steaks and whole and cut cod being prepared by the elderly fishmonger, while carp, pike, and herring are artfully arranged on the round table, a wooden tray, and in a copper bowl at the right within reach of two discerning housewives. The scene is set in an idealized market square with architectural features inspired by Sebastiano Serlio’s Architettura, a treatise on architecture, several volumes of which had been published by the designer Pieter Coecke van Aelst in Antwerp in 1545.

Unlike Beuckelaer’s earlier treatment of kitchen and market scenes, this one does not present a secondary biblical theme in the background, and instead is purely secular. The fact that Beuckelaer ceased the production of his theatrical-theological market scenes in 1566, the year of the great Iconoclasm, cannot be a coincidence. As an alternative to religious scenes, later pictures, such as The Met’s painting, increasingly embraced a moralizing subtext, warning against the excesses of food and sexual pleasures, a theme that is intimated here.

Jan Gossart’s Christ Carrying the Cross has been on loan to The Met since the 2010 monographic exhibition, Man, Myth, and Sensual Pleasures: Jan Gossart’s Renaissance. With great pleasure we announce that we have been able to acquire this diminutive but emotionally compelling work through the generosity of Ambassador J. William Middendorf II and additional purchase funds of The Met.

In this poignant work, Christ stumbles under the heavy burden – both physical and psychological – of the cross that he bears on route to Golgotha, the site of his crucifixion. This excerpt from the traditional Passion narrative is intended for meditation focused on Jesus’s suffering during his Passion, and is linked with popular devotional texts, namely Thomas à Kempis’s De Imitatione Christi (Imitation of Christ) of ca. 1420. Book Two, chapter 12, “On the Royal Road to the Holy Cross” begins with the well-known passage from the Gospel of Saint Matthew 16:24: “Deny yourself, take up your cross, and follow Me.” The accompanying exegesis explains that the route to salvation is only through vicariously bearing the cross and dying with Jesus, and that by embracing his anguish, one shares his glory. The reader’s shared experience with Christ through self-denial and suffering thus is prompted by Gossart’s painting.

This little-known painting was only publically displayed twice in the last thirty years, once in 1983 at an exhibition at Colnaghi, New York, where it was catalogued by Ellen Konowitz and Egbert Haverkamp-Begemann as by Gossart. The attribution was confirmed in the 2010 monographic exhibition on Gossart at the Metropolitan Museum of Art, where it was installed alongside other autograph works, dating to ca. 1520-25. Gossart presented Christ in isolated Passion scenes in several paintings and a print from the later part of his career. He portrayed Christ mocked in both a print of ca. 1525 and a painting of 1527 (Museum of Fine Arts, Boston, 1972.23; and Szépművészeti Múzeum, Budapest, 4362), and focused on Christ’s utter despair before the Crucifixion in Christ on the Cold Stone of ca. 1530 (Real Colegio del Corpus Christi, Valencia, 094). All of these share Gossart’s keenly felt and poignant depiction of a dejected Christ, conveyed especially in the facial expression but also in the dynamic pose of the figure. 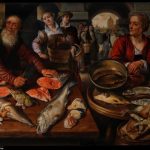 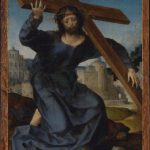