From the museum press release, 6 October 2010

We have just been informed that Museum Boijmans Van Beuningen has a new Rembrandt in the collection. According to the new standard work on the painter, the painting Tobias and his wife is not the work of a pupil of Rembrandt, but is by Rembrandt himself. From Friday 8 October the painting will be exhibited for one month in the museum.

This week the Rembrandt expert Prof. Dr Ernst van de Wetering presented the fifth volume of the Rembrandt catalogue raisonné. His research demonstrates that the painting Tobias and His Wife was painted by Rembrandt van Rijn and not, as was believed for many years, by a pupil of the master. Museum Boijmans Van Beuningen is pleasantly surprised by the news.

Rembrandt painted the scene of a man and his wife by an open hearth over an older still life by another artist. In many places the layer of paint has become so thin that traces of the still life are visible. The museum is having the work restored in preparation for its loan to an exhibition in Japan. Following the announcement, the museum has decided to postpone the restoration of the work, which is normally kept in storage, for a month in order to exhibit the work publicly in Rotterdam.

In the latest volume of A Corpus of Rembrandt Paintings Ernst van de Wetering states that the work is undoubtedly by Rembrandt. His conclusion is based upon several arguments. There are various similarities with the etching Saint Peter and Saint John healing the cripple at the gate of the temple of 1659. Furthermore, the specific feeling for detail is similar to Rembrandt’s work of the 1640s. According to the art historian, the representation and placement of the figures, the application of perspective in the work and the step in the foreground all suggest that the work is a genuine Rembrandt.

Tobias and his wife is part of the collection of the Willem van der Vorm Foundation, which is on long-term loan to Boijmans Van Beuningen. In addition to this newly attributed work, the museum has three paintings and thirty-six drawings by Rembrandt and several works by the School of Rembrandt in the collection. 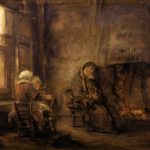 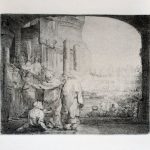