From the publisher’s press release, 6 October 2010

On Wednesday 6 October 2010, Ernst van de Wetering, widely accepted as the Rembrandt expert, will present the fifth volume of A corpus of Rembrandt paintings at the Frankfurt Book Fair. The fifth volume of the Corpus sets out the results of research conducted by the Rembrandt Research Project, chaired by Ernst van de Wetering, which was established in 1968 in order to investigate Rembrandt van Rijn’s oeuvre. The book consists of a catalog and analysis of the so-called small-scale history paintings including Rembrandt’s few genre paintings. In the art-theoretical sections of Volume V, new ground is broken not only in the approach to Rembrandt as an artist, but more particularly to his thinking about painting. The catalog section deals with works by Rembrandt as well as with related works by his pupils and followers, sometimes made in collaboration with Rembrandt himself.

In this new volume, 30 small-scale history and genre paintings from 1642 till the end of Rembrandt’s life are analyzed and cataloged. This theme was chosen because this type of complex work shows a variety of full-length protagonists acting in different narrative settings. For this reason, in the 17th century painting, etching or drawing, biblical and mythological scenes were looked upon as an artist’s greatest challenge. Among these works are famous paintings like Susanna and the elders in Berlin, the hotly debated Polish rider in New York and other masterpieces. All aspects of the skills necessary to create a pictorial illusion play a part in the creation of small-scale history paintings. In Rembrandt’s day, these aspects were referred to as ‘the basic aspects (the gronden) of the noble art of painting.’ Two Dutch 17th century painters (Karel van Mander and Samuel van Hoogstraten) discussed these gronden systematically in two books which up till now have only been consulted sporadically in the context of 17th century studio practice and the art theory on which this was based. Comparing the two books, and considering them in relation to Rembrandt’s oeuvre, gradually revealed his original views on painting and how these had developed during his career.

New in this book is an illustrated survey of all 90 small-scale history and genre paintings by Rembrandt from ca. 1625-1669 in conjunction with his 80 etchings and a large sample of 50 drawings of this type. The etchings are systematically shown in reverse, compared to the prints that are commonly known, as Rembrandt designed his etchings directly on the etching plate. This way of showing the etching allows surprising insights into Rembrandt’s pictorial and narrative thinking. It allows the discovery of discerned patterns in his creative thinking that were not previously known.

Moreover, a detailed comparison of Rembrandt’s works and those by his apprentices, who based their works on his, led to a detailed understanding of Rembrandt’s views on pictorial quality. The new volume of the Corpus is an important publication – not only for art historians but also for all who want to fully enjoy the numerous works of art that date back to the Dutch Golden Age, now scattered in museums around the world. The ‘Rembrandt Research Project’ began in 1968 with the aim of separating Rembrandt’s own paintings from the vast number of Rembrandtesque paintings made by his many apprentices and followers. Having opted for a chronological approach to the cataloging of Rembrandt’s paintings in the first three volumes, it was decided in 1993 to adopt a thematic approach for further volumes. This was largely to facilitate the recognition of different hands. The new approach yielded much more information not only about Rembrandt’s working methods but also about the function and meaning of his works. 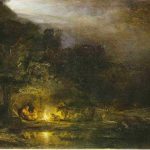