The important restoration of one of the showpieces of the Royal Museum of Fine Arts in Antwerp (KMSKA) has been completed. After three years of meticulous treatment, The Seven Sacraments by Rogier van der Weyden shall be shown in all its original glory at the forthcoming exhibition Rogier van der Weyden 1400|1464: the passion of the master at Museum M in Leuven.

From the museum press release, 2 September 2009

The triptych of The Seven Sacraments was painted by Rogier van der Weyden and his workshop. Rogier van der Weyden (1399/1400 – 1464) was one of the most influential painters of the fifteenth century. He created the triptych between 1440 and 1445. The painting shows the interior of a church and the simultaneous administration of the seven sacraments. In the middle panel, centrally in the nave, Christ is depicted on the cross, with the Virgin, St John and the three Marys standing beside. Many of the figures on the side panels appear to be portraits, though just one has been identified: the bishop who is administering the Sacrament of the Confirmation is Jean Chevrot, the donor of the altarpiece.

The work was bequeathed to the Royal Museum in 1841 by Florent van Ertborn (1784-1840). The Royal Museum has been able to restore the masterpiece thanks to the generous support of SD Worx and the Inbev-Baillet Latour Fund. It took Dr. Griet Steyaert three years to complete the treatment project (2006 – 2009). The restoration of the triptych was necessary, as here and there the paint layer had become loose and pieces were in danger of being lost. Moreover, the original surface layer had become obscured by a thick layer of aged varnish, overpaintings and previous retouches. As the careful cleaning of the painting progressed, the original richness of colour gradually reappeared. Subtle details, such as pins in some of the headscarves, became visible again. Some of the heads in the painting posed a specific restoration challenge: while part of the original composition, they were not painted directly onto the panel, but rather onto tinfoil and subsequently cut out and fixed to the oak support, which has for that matter also been treated. The Seven Sacraments was fitted with a new frame, believed to be close to the original. Before and during the treatment, the painting also received a thorough material and technical examination. As this work is an important masterpiece, the restoration was carried out in consultation with an international supervisory commission.

This project is undoubtedly the most important in the ten-year history of the museum’s restoration workshop. Over the past decade, the workshop team has restored over eighty paintings. Some restoration projects are performed behind a glass wall, so that visitors to the museum can follow the process. During “open hours”, members of the public can enter the restoration room and interact with the restorers. However, the workshop is not only about restoration. The team also takes care of the conservation of the approximately 2700 paintings in the museum collection. These stabilising treatments are crucially important, as they prevent further deterioration of the paintings and ensure that the collection is maintained for the next generations. Over the past ten years, hundreds of paintings have been treated in this manner. Shortly the triptych will be moving to Museum M in Leuven, where it will feature prominently in the exhibition Rogier van der Weyden 1400|1464 – The Passion of the Master from 20 September onwards. The Seven Sacraments is one of the highlights of this prestigious exhibition, which brings together over a hundred showpieces from the most prominent collections in Europe and the United States. 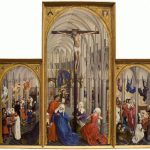 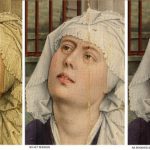 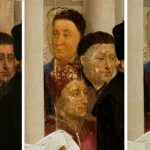