This morning Sotheby’s announced the discovery of two works by the late 17th-century Dutch still life specialist Adriaen Coorte. The works are from the property of a Dutch family and were recently found in a closet, which prompted the owner to as Sotheby’s “if they had any worth”. It was established they were by Coorte and the paintings were estimated to be worth 100,000-150,000 euro a piece. They will be auctioned 1 December in Amsterdam.

One of the paintings shows an earthenware bowl with strawberries on a stone ledge, the other shows three peaches on a similar ledge. Coorte specialized in this kind of small-scale, elegant still lifes, often featuring fruit or shells.

Until now, 64 paintings by Coorte were known. Quentin Buvelot, who organized the Coorte-exhibition in the Mauritshuis in the Hague last year, will write an article on the two finds and a painting by Coorte he found recently himself. 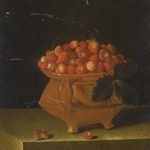