The host of the last CODART-congress announced a spectacular acquisition this week. The museum was able to purchase the painting, a Arboraceous landscape with a resting shepherd by Thomas Gainsborough (1727-1788), partly through a very succesful crowdfunding campaign, the first in its kind in the Netherlands. In four weeks time the museum raised nearly 60,000 euro’s. Since the aim was to raise 10% of the price of the painting (€ 378,000), the targets have been more than surpassed.

Arboraceous landscape with a resting shepherd, from ca. 1746 is an early work by Thomas Gainsborough. Gainsborough’s landscapes are deeply rooted in the work of Dutch 17th-century landscape painters as Jacob van Ruisdael and Meindert Hobbema. The painting will be on view from 3 September among its Dutch predecessors from the museum’s collection. 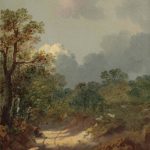