The John and Mable Ringling Museum of Art today announced its acquisition of the Adoration of the Shepherds by Otto van Veen (1556-1629). The oil on copper painting (34 ½ x 28 7/8 in.) is believed to have been created ca. 1600. Van Veen was one of the masters of Peter Paul Rubens, the Flemish Baroque artist. Rubens’ large canvases related to his Triumph of the Eucharist tapestry series represent the anchors of the Ringling Museum’s collection of Old Master paintings, which also includes a number of other important paintings by Rubens. Van Veen’s Adoration of the Shepherds is based on the Gospel of Saint Luke, which tells of shepherds adoring the newborn Christ. The newly acquired work, purchased from Christie’s in New York, will be featured in Gallery 13, alongside works by Rubens. This installation will illustrate Van Veen’s early influence on Rubens.

“We are pleased to grow and enhance the Ringling Museum’s esteemed collection of Old Master paintings,” said Steven High, executive director at The John and Mable Ringling Museum of Art. “Works by Van Veen rarely appear on the market, so we are particularly excited to add it to our collections. Rubens is one of our audiences’ most beloved artists so we look forward to introducing visitors to one of Rubens’ most important influences.”

Dr. Virginia Brilliant, the Ringling Museum’s Curator of European Art, added, “The painting enhances our understanding of Rubens and illustrates the tradition that he emerged from and broke from to create his own style. The Ringling Museum is home to one of the foremost collections of works by Peter Paul Rubens in America. It is most appropriate for the Ringling to own a work by his talented master which ably and clearly demonstrates the origins of Rubens’ distinctive style—elements of which he retained in his own art and others which he shrugged off altogether, radically altering the course of the history of art.”

In this large copper panel, Van Veen created a dense, horizontally oriented composition using brilliant primary colors and dramatic lighting effects. The work features a striking range of countenances, from the graceful Virgin, to the heroic male shepherd, to the androgynous angel. An array of distinctive facial expressions also enliven the work, including the mischievousness of the husky teenage angel at the composition’s apex, the shepherd caressing his female companion at the composition’s left, and the pensive seriousness of the shepherd standing towards the rear of the group at right. Charming too are the work’s many delicately painted animals.

Although Rubens came to adopt a more painterly working method than his teacher, similarly lively facial expressions appear in paintings by Rubens as well, such as his Adoration of the Shepherds now in the Sint-Pauluskerk in Antwerp. Van Veen’s painting style is representative of the mild classicism characteristic of painting in Antwerp in the early seventeenth century.

A distinguished and scholarly artist, Van Veen was born into an aristocratic family. He studied in the Netherlands and Italy and had a large studio in Antwerp where he spent most of his career. Van Veen mentored the young Rubens at this studio at the end of the 16th century. Like his pupil Rubens, Van Veen found great success as a court painter and worked for Rudolf II in Prague, William V in Bavaria, and Alessandro Franese in Brussels, among others. 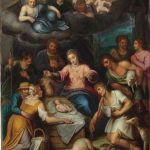 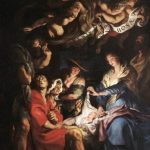