Amid great interest from both the press and the public, the Night Watch was moved to the Philips Wing in December 2003, so that it could remain on view during the renovation of the main building. The canvas, painted by Rembrandt van Rijn in 1642, had left the museum only twice before, in 1898 and 1939. The painting is the property of the city of Amsterdam. It is 4.54 meters wide and 3.79 meters high, and weighs some 170 kilos without the frame.

After careful preparations and intensive collaboration between the museum, the transport firm and specialized technicians, the painting can now be conveyed under optimal conditions to the main building of the museum. In the Philips research centers, the logistics of the move have been thoroughly studied and simulated. First the painting will be placed in a wooden frame developed by Crown Fine Art, who will also take responsibility for the actual moving of the canvas. A protective cover, specially developed by Philips, will be placed around the wooden frame. This soft covering – which is supplied with instruments such as sensors that keep track of temperature, humidity and shocks – consists of a 300-kilo steel frame, a layer of insulating foam and a protective blanket. 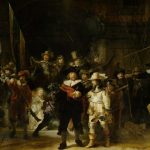 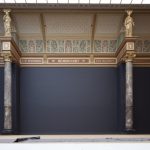