Robbrecht and Daem Architects have designed a new Rubens-inspired reception building for the Rubens House in Antwerp. Located on Hopland, it will stand discreetly and to one side of Rubens’ celebrated sight-line from the portico to the garden pavilion. With a multimedia experience center, a museum café, a reading room, and the Rubenianum’s extensive library collection, the design is an important link in the future vision for the Rubens House and the Rubenianum. 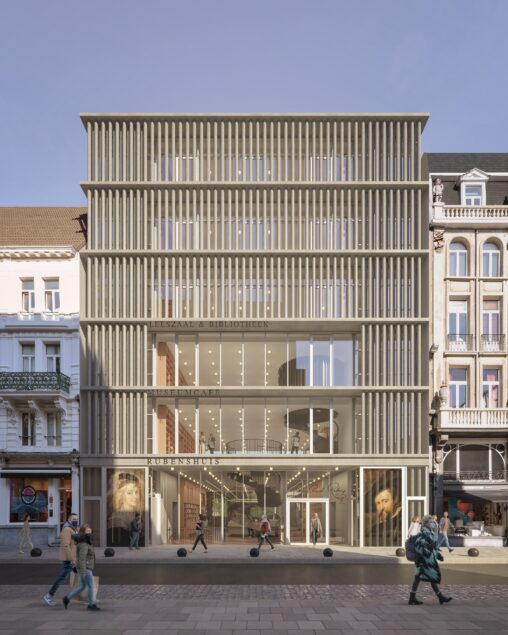 ‘How blessed is our city of Antwerp with two of its extraordinary citizens: Rubens and Moretus! Visitors will marvel at their houses, foreign tourists will admire them.’ So wrote the Antwerp humanist and alderman Jan Woverius in a letter of 1 October 1620 praising his fellow citizens’ homes. Just how far-sighted Woverius was can be seen from the visitor numbers four centuries later: in recent years, the Rubens House has hosted roughly 200,000 visitors annually from more than thirty countries. The Rubenianum, which houses the most extensive documentation and library on early-modern Flemish art in the world, is also the focus of growing interest on the part of researchers and has clearly outgrown its facilities. Completion of the conservation of the portico and garden pavilion formed a new milestone in the history of the Rubens House. The rest of the site now calls for a similar approach: with absolute respect for Rubens’ work and a sense of innovation worthy of this great Baroque master. The City of Antwerp and Robbrecht and Daem Architects (partly in collaboration with Callebaut Architects) have drawn up a new vision for the future that reinforces the heritage values, relieves pressure on the site, and puts the figure of Peter Paul Rubens center stage once again.

An important lever for the development of this future vision is a grant from Tourism Flanders of just under 3 million euros. The subsidy is a contribution to a total vision for the artist’s home and surroundings, drawn up in close consultation with the Flanders Heritage Agency. The City of Antwerp is backing the integrated plan with a generous investment. Some 17 million euros will be spent on construction work in the current policy period. Building will commence in the autumn of 2021 and will be carried out in phases. The overall project is scheduled for completion in 2024.

More information on the new plans can be found here