At a recent auction in New York, the King Baudouin Foundation succesfully acquires a notebook with Rubens’ theoretical notes on the art of drawing. The manuscript (known as the so-called De Ganay-manuscript) is one of four known copies after the original autograph notebook, that has been lost in a fire in 1720. In the course of next year the manuscript will receive a permanent place in the Rubenshuis, that receives the manuscript as a permanent loan.

The "De Ganay-manuscript" was made in the 17th century, shortly after Rubens’ death. It is probably a copy by someone from the immediate circle of Rubens. The book shows that Rubens was not only a great and erudite artist, but also an ambitious and original theoretician.

Rubens’ theoretical notebook is the subject of the upcoming volume of the Corpus Rubenianum, to be published in the beginning of 2013. This volume will be written by Prof. Arnout Balis (VUB) in collaboration with Dr. David Jaffé. 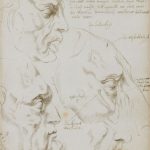