The Portrait of Clara Serena by Rubens, which featured in the recent exhibition Rubens in Private, will continue to stay in the Rubenshuis. The museum recently announced that it received the portrait on long-term loan from the private collector who owns it. In March 2015, Ben van Beneden, the director of the Rubenshuis, accepted the former Metropolitan painting—after restoration and research—as authentic. He dates it from 1620 to 1623, the year when Clara died at the age of 12.

In addition to the portrait, the Rubenshuis received four other long-term loans. These include a Still life with Vegetables by Adriaen van Utrecht (1599-1652) and a Portrait of Emperor Galba by Rubens. The former is displayed next to the ‘De Ganay Manuscript’, which is on loan from the King Baudouin Foundation. Lastly, the museum received a tapestry design for Geometry by Cornelis Schut (1597-1655).

For images of all the artworks, see Rubenshuis.be. 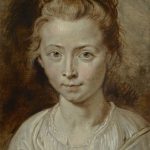