Recently the news has reached CODART that on 3 September 2015 the great Rembrandt scholar, Werner Sumowski, passed away. Sumowski, Professor emeritus at the University of Stuttgart, was above all known for his series of standard works on the Rembrandt school.

Werner Sumowski was born on 8 March 1931 in Geman Ortelsburg, now known as Szczytno (Poland). He studied at the Humboldt University of Berlin under Richard Hamann, where he published his first essays in 1956. In 1963 he moved to West Germany to become a research assistant at the University of Stuttgart. Sumowski wrote a thesis on Caspar David Friedrich and was appointed university lecturer in 1971 and worked as professor from 1973 to 1993.

Sumowski will mostly be remembered as the author of a number of profound studies on the Rembrandt school. His extensive six-volume Gemälde der Rembrandt-Schüler, published from 1983 to 1994, and the ten volume Drawings of the Rembrandt School, published in 1979, contain a wealth of information on the paintings and drawings by Rembrandt’s pupils and imitators. 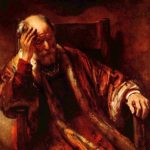