Adam Eaker, Guest Curator at the Frick Collection, writes on the Frick’s blog about the new installation in the Frick’s East Gallery. The installation is intended to evoke a British country house in its juxtaposition of painting, sculpture, and furniture. Among the highlights are three portraits of English sitters by Anthony van Dyck that have been in storage for several years: Sir John Suckling; Lady Anne Carey, Later Viscountess Claneboye and Countess of Clanbrassil and Lord and Lady Strange, Later Earl and Countess of Derby, with Their Daughter.

The return of these paintings to the galleries offers visitors a preview of next year’s special exhibition Van Dyck: The Anatomy of Portraiture (2 March through 5 June , 2016), which will place six of the Frick’s eight portraits by the artist in the context of more than ninety paintings, prints, and drawings from public and private collections around the world. The presentation has provided the occasion for renewed research into the Frick’s holdings by the artist, whose works were particularly sought after by Gilded Age collectors, including Henry Clay Frick. 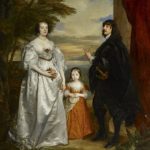