Information from the museum 24 February 2018

The everyday world of their 17th-century residents is evoked through items from the museum’s own rich collection of 16th and 17th-century art, supplemented by long-term loans from the collections and reserves of Belgian museums (the Royal Museum of Fine Arts, the Maagden Museum, MAS, the Vleeshuis Museum and the Rubens House in Antwerp, the Groeninge Museum, Bruges, the Royal Museums of Fine Arts in Brussels and M Museum, Leuven), museums abroad (Musée de Flandre, Cassel, Museumslandschaft Hessen, Kassel, Museum der bildenden Künste, Leipzig, Centraal Museum Utrecht, Liechtensteinmuseum, Vienna, Prado, Madrid and Frey-Näpflin Stiftung Stans) and private collections (including the Phoebus Collection and the Lottery Museum).

Nicolaas Rockox and Frans Snijders were key figures in Antwerp during the Baroque era. Each made his mark on the city’s cultural and social life – Nicolaas as burgomaster and Frans as a brilliant painter of animals and still lifes. They were also neighbours for 20 years, occupying adjacent patrician’s houses in Keizerstraat.

Snijders got on well with Nicolaas Rockox. Both men had an art collection and Rockox owned a still life by Snijders. The burgomaster had already made his name as an antiquarian and might have helped Snijders in 1616 when he acquired five plaster casts from the estate of Cornelis Floris III, including busts of Marcus Aurelius and Hercules – purchases that testify to his interest in classical antiquity and Neostoicism, as developed by the humanist Justus Lipsius. Independently of one another, Snijders and Rockox each had Anthony van Dyck paint their portraits in 1621, highlighting the important status both gentlemen enjoyed. Rockox also invited Snijders to witness the final codicil to his will. Rockox and Snijders might have died over 400 years ago, but their houses still testify to a fascinating piece of Antwerp history. 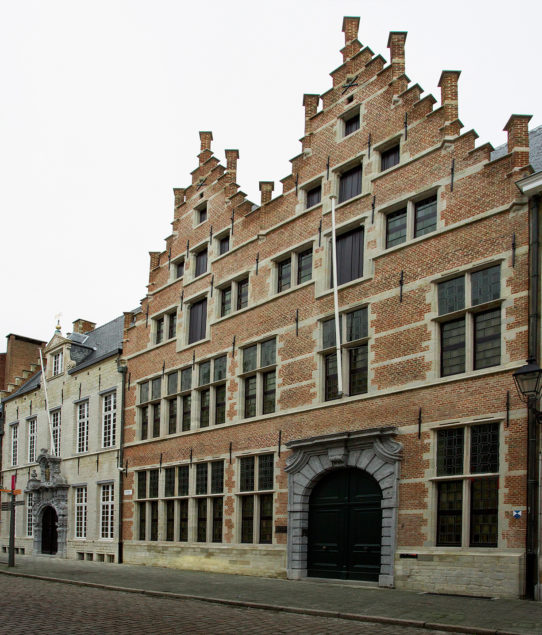 The Snijders&Rockox House in Antwerp. On the left is ‘Den Gulden Rinck’ of Nicolas Rockox and on the right Frans Snijders’ residence ‘De Fortuyne’.