From the beginning of June the new displays of Museum Boijmans Van Beuningen’s collection, The Collection Enriched, will be augmented with a monumental masterpiece by Peter Paul Rubens (1577-1640). This painting from the Royal Museum of Fine Arts in Antwerp is the most spectacular of the more than twenty works that
are boosting the museum’s own collection over the next three years. Museum Boijmans Van Beuningen is delighted to be able to exhibit this painting temporarily alongside the works by Rubens from the museum’s own collection.

Rubens, the great master of the Flemish Baroque, is represented in Museum Boijmans Van Beuningen’s collection by an exceptionally fine and world-famous group of oil sketches. These studies give an excellent impression of the talent on which his reputation rests. No composition was too difficult for Rubens; no story to complicated for him to paint. And above all: there was no posture or emotion that he was unable to depict to arresting affect.

Propaganda of the highest order

Peter Hecht, guest curator of The Collection Enriched, on this masterpiece: "With the loan of this altarpiece, which once stood in the Church of the Discalced Carmelites in Antwerp, we can now see in Rotterdam just how impressive Rubens’ finished works are. The devout congregation would have shuddered at the sight of the masterfully painted burning souls in purgatory and would have found solace in the figure of Saint Teresa of Ávila, who successfully pleads with Jesus for the deliverance of these poor souls. The Protestants gave short shrift to purgatory and the Roman Catholic saints – but whoever saw this painting might have begun to doubt the new faith. And that was precisely what the Roman Catholic Church hoped for. This painting by Rubens is visual propaganda of the highest order."

Museum Boijmans Van Beuningen is the only museum in the Netherlands with a collection that gives an impression of the wealth of European painting in its entirety and in which Dutch and Flemish painting are equally well represented. The Collection Enriched provides the opportunity to extend this scope. For the duration of this new presentation, the museum’s own masterpieces by old masters such as Hieronymus Bosch, Pieter Bruegel, Rubens, Rembrandt, Dürer and Titian and modern masters such as Kandinsky and Magritte will be joined by paintings by Memling, Tintoretto and Spencer. The displays also include more than sixty works that have not been exhibited for the past ten years.

The Collection Enriched has been made possible by our chief patron, the Rembrandt Society. With thanks to Sikkens, BankGiro Loterij and Rabobank Rotterdam. Additional finance has been supplied by the Bequest of Mrs Riemsdijk-Borsje. 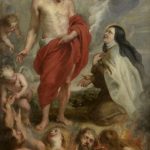