This afternoon, the Rijksmuseum handed over a unique loan to the National Maritime Museum in London. After 345 years, the ‘stern carvings decoration’ of the flagship the Royal Charles has been returned to England. In June 1667, the wooden decoration (3m wide and 2m tall, weighing 750kg) was taken in triumph to the Republic of the Seven United Netherlands by Dutch maritime hero Michiel de Ruyter. The piece will be one of the highlights of the Royal River. Power, Pageantry and the Thames exhibition opening on 27 April.

HRH Willem Alexander, Prince of Orange, was present on the patrol vessel Holland of the Royal Netherlands Navy when the ‘stern carvings’ (the richly decorated stern of the ship) was hoisted on board. The Holland is the first vessel of the Holland class, a series of four patrol vessels in the Royal Netherlands Navy fleet. This afternoon, both the Prince of Orange and HRH Prince Michael of Kent were present at the official loan ceremony in London. General Director of the Rijksmuseum Wim Pijbes handed over the counter to Kevin Fewster, director of the National Maritime Museum.

Pride of the English fleet

In 1667, the stern carvings, which until now had been displayed in the Philips Wing of the Rijksmuseum, was seized from the English in a spectacular fashion by Michiel de Ruyter. At the time, the Dutch were at war with the English and although peace talks had begun, the Republic decided to pressure King Charles II of England, in order to speed up the negotiations. The Dutch fleet therefore sailed to Chatham, where the English fleet was anchored, sunk several ships and took the Royal Charles, the pride of the English fleet, to the Republic as booty.

Soon after, in 1673, the Royal Charles was sold for scrap, and at the end of the 19th century, the Navy gave the counter to the Rijksmuseum, where it has been on public display ever since. When the main building of the Rijksmuseum reopens in spring 2013, the counter will be displayed in the 17th century maritime gallery.

The ceremony with which the counter was handed over. Historian Richard Holdsworth tells about the Dutch attack (In Dutch, some English) 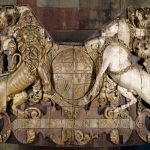