Since 1998 the Gemäldegalerie in Berlin is housed in the Berliner Kulturforum near Potsdamer Platz. It was the final realization of the wish to reunite the Berlin collections of Old Master paintings after the fall of the wall in 1989. Now, only 14 years later local politicians wish to empty the building to make place for 20th-century paintings of the Marx and Pietzsch-collections. This will create a center of 20th-century art at the Kulturforum, with the Neue Nationalgalerie next to it.

Information from the Frankfurter Algemeine, Berliner Zeitung and others, 4 July 2012

The old master paintings will in part be moved to the Bode-Museum. The Bode-Museum’s wall space is however far from sufficient for the collection that is now on view at the Gemäldegalerie in the Kulturforum. Many paintings will disappear in storages. There is no clarity when a planned new building near the Museumsinsel (the projected spot for all "classical art" in Berlin) will be ready. Especially with large building projects competing for funds (such as the rebuilding project of the Stadtschloss) concern is that a large part of the collection of Old masters might not be on view for many years to come.

The plans have caused concern and outcry around the globe. It is feared that one of the most important collections of Old Master paintings (and this is certainly also true for the Dutch and Flemish part of it) will be the victim of the plans sketched above. At the moment two online petitions protest the plans, one by Jeffrey Hamburger, Kuno Francke Professor of German Art & Culture, Harvard University, which you can find here, and one by the Verband Deutscher Kunsthistoriker (in German) here. 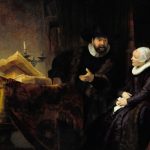