The J. Paul Getty Museum in Los Angeles announced the acquisition of two exceptional European paintings—a recently rediscovered self-portrait by one of the most celebrated painters in history, Rembrandt, and a light-filled view of the Grand Canal by Canaletto, Venice’s most influential painter.

“It is extraordinary to be adding two such rare and outstanding works to the collection at the same time, each of which will greatly enhance what are already highly distinguished areas of our paintings collection,” said Timothy Potts, director of the J. Paul Getty Museum. “The Getty Museum possesses the most significant collection of early Rembrandts in the United States, and if you had asked what addition would best cap it off, the answer would have been a self-portrait, which many regard as his greatest and most sustained achievement. But the chances of finding such a work seemed negligible—until the rediscovery of this painting in 2007. It is unquestionably one of the most remarkable works of art to become available in recent memory.”

“The Canaletto likewise is a tremendous addition to our growing collection of Italian view paintings,” Potts continued. “This view of the Grand Canal is one of the artist’s finest achievements in his signature style, and is in such pristine condition that the sunlit scene positively glistens. It represents the artist at the height of his powers and demonstrates the assured brilliance with which he captured Venice’s colorful pageant of villas, gondolas and bustling merchant life.”

Rembrandt Laughing, about 1628, by Rembrandt Harmensz. van Rijn (Dutch, 1606–1669) is an early self-portrait, depicting the artist—who would have been about 22—dressed as a soldier, in deep violet and brown clothes and sporting a gleaming steel gorget. The young man leans back, smiles broadly and catches the viewer’s eye. His animated features are captured in this spontaneous moment of lively exchange with expressive, short brushstrokes.

Painted on copper, this small oil (8 3/4 x 6 5/8 inches) bears the artist’s monogram, “RHL,” which combines his name with Leiden, the city in which he was born and worked at the time. It is very well preserved and Rembrandt’s vigorous, assured technique has lost none of its immediacy.

“Painted when Rembrandt was a young, newly independent artist, possibly the third self-portrait of his career, Rembrandt Laughing exemplifies his signature spirited, confident handling of paint and natural ability to convey emotion,” explains Scott Schaefer, senior curator of paintings at the Getty Museum. “It is a measure of the artist’s consummate skill that the dynamism of his pose and the act of laughing translates into a painting of tremendous visual impact, far exceeding its modest dimensions. It is destined to become one of the Getty’s signature paintings.”

Considered the greatest painter of the Dutch Golden Age, Rembrandt possessed a brilliant technique and unrivaled ability to capture the drama of life. His exploratory interest in the human character was expressed not only through the interpretation of diverse mythological and historical subjects, but through an exceptional number of self-portraits, a genre he transformed. Ranging from informal studies to elaborate fantasies and distinguished likenesses, Rembrandt’s self-portraits are among his most lauded works.

After centuries in private collections, this painting emerged on the market in 2007. Previously known only through print reproductions, it had been attributed to a contemporary of Rembrandt. Scholarly analysis and scientific testing, made possible once the painting entered the public sphere, led many experts, including leading members of the Rembrandt Research Project, to re-attribute the work to Rembrandt himself. It was exhibited to the public for the first time, as a Rembrandt, at the Rembrandthuis Museum in 2008. Notably, of the nearly 40 self-portraits he painted in his life, Rembrandt Laughing is the first in which he depicts himself in evocative costume.

Rembrandt Laughing will be exhibited in the East Pavilion among the Museum’s four Rembrandt paintings (An Old Man in Military Costume, 1630–31; The Abduction of Europa, 1632; Daniel and Cyrus before the Idol Bel, 1633; Saint Bartholomew, 1661) and Rembrandt’s superb Portrait of a Girl Wearing a Gold-Trimmed Cloak of 1632 (on long-term loan from a private collection), and in proximity to other small-scale Dutch paintings on copper and panel.

Additional information is available at www.getty.edu. 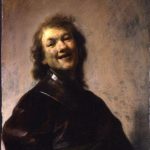