Since June, the Rembrandt House Museum has become the proud temporary home of Rembrandt’s recently rediscovered Portrait of Eleazar Swalmius (1582-1652), a Calvinist minister in Amsterdam, painted in 1637. The portrait is on loan from the Royal Museum of Fine Arts, Antwerp for seven years. The painting had sunk into obscurity because the attribution to Rembrandt had been called into question. However, when the painting was stripped of its thick layers of yellowed varnish in 2008 it emerged in perfect condition. The signature proved to be original and likewise completely intact. All doubt about its authenticity disappeared at a stroke. It is a magnificent portrait, exceptionally large, painted in a period when Rembrandt was making relatively few portraits. The recent pledge by the current director of the Rembrandt House to have a genuine painting by Rembrandt in the museum at all times has for the time being been more than redeemed as the splendid Old Man with Turban from the Kremer Collection can still be seen in the ‘Salon’.

The Nieuwe Kerk in Amsterdam will show yet another painting by Rembrandt this autumn. The Holy family from the State Hermitage Museum will be on loan from 11 October to 13 November 2011. 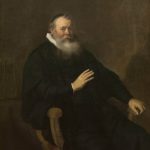