For years, MIA curators have suspected that the enthusiastic sportsman in the foreground of Meindert Hobbema’s Wooded Landscape with a Watermill was added at a later date. The museum now gives the public the chance to decide whether the hunter in the foreground should be masked, to show the painting as it was once intended by Hobbema, or not.

On its website, the museum explains why the huntsmen is a later addition and what the process of masking would entail. It also shows what the painting would look like without the hunter. 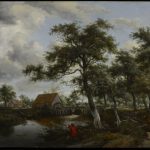 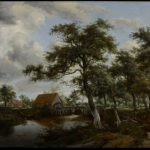