On 19 December in the Frans Halsmuseum in Haarlem, the exhibition Judith Leyster: the first woman to become a master painter will open, honoring her 400th birthday. During the preparations for the exhibition a painting has been rediscovered, that for centuries has always been in private collections and never on public display.

In August, a Belgian collector addressed the museum and told she had in her possession a work by Judith Leyster (1609-1660). Anna Tummers, curator of Old Masters at the museum, confirmed the work as a flower still life signed "Judith. molenaers 1654".

The painting is very likely to be the blompotje van Juffr. Molenaer (flowerpot by Ms. Molenaer), that is mentioned in the inventory of possessions made up after the death of her husband, painter Jan Miense Molenaer. In this inventory she is consequently called "Molenaer", which suggests she signed with her husband’s name as is the case here.

In 1636 Leyster married. There is not much known about her career as a painter after the marriage. Up till now only a study of a tulip dated 1643 was known. The present painting, dated 1654, proves she has been painting at least up till 11 years after we knew before.

the expert on Judith Leyster, Frima Fox Hofrichter states: "Many art historians have often assumed that Judith Leyster gave up painting upon her marriage. With the discovery of the flower still life and its date of 1654, we now have documentation that she continued her career as a painter. It is likely that Leyster moved to still-lives and botanical studies after her marriage, perhaps to split the market with her husband, Jan Miense Molenaer." 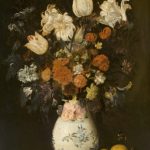