Greece will return the painting by Rubens that has recently been recovered in Greece to the rightful owner the Museum voor Schone Kunsten in Ghent.

Two undercover agents found the work in Glyfada, near Athens. It had been stolen in 2001 by three masked thieves.

A 65-year-old former antiques seller and a 40-year-old televisionpresenter have been arrested after the painting was discovered in their car. The have been accused of money laundering. The presenter has claimed that the painting was given to her by an Italian admirer in 2003, while on vacation in Rhodos. She claims to have not known the value of the work of art. 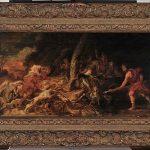