New facts have emerged about the greatest forgery of the twentieth century: the ‘Vermeers’ of master forger Han van Meegeren. Museum Boijmans Van Beuningen owns possibly the most famous forgery in the Netherlands: The Supper at Emmaus. The latest in the series of publications, Boijmans Studies, deals with the history of this sensational forgery and reveals how Van Meegeren was able to mislead the entire art world.

Until now it was believed that Han van Meegeren (1889-1947) used pigments that were common in the seventeenth century. But recent analysis of the forged painting shows that Van Meegeren’s paint also contained pigments that were not introduced until the nineteenth century. It has also emerged that there were indeed concerns about the authenticity of the ‘Vermeers’ at the time. The diary of Willy Auping (then curator at the Kröller-Müller Museum) has recently come to light. In it he writes disparagingly of The Washing of the Feet by ‘Vermeer’, purchased by the Rijksmuseum at the time for the extraordinarily high sum of 1.3 million guilders: ‘Everything is just bad and crude and I really don’t know what I can say about it, but it is absurd to believe for one moment that the great Johannes Vermeer of Delft could ever have made such a bad painting as this […]’.

The unmasked ‘Vermeer’ of Boijmans

In 1937 the canvas The Supper at Emmaus was discovered in France. It was hailed by Dutch art historians and connoisseurs as the masterpiece of Johannes Vermeer (1632-1675). The painting was even compared in importance to The Night Watch by Rembrandt. In 1937 the then director of Museum Boijmans, Dirk Hannema, succeeded in beating the Rijksmuseum to the painting for 520,000 guilders. Museum Boijmans proudly exhibited the work as a highlight of the collection. After the war it became clear that the maker of the painting was not Johannes Vermeer, but Han van Meegeren (1889-1947). Van Meegeren admitted that he had knowingly forged the painting and several other ‘Vermeers’. Following his confession, the painter became one of the most famous figures in the Netherlands. Museum Boijmans Van Beuningen has two other famous Vermeer forgeries by Van Meegeren in the collection: Head of Christ and Isaac Blessing Jacob.

This illustrious history and the new evidence are dealt with in the latest in the museum’s series of art-historical publications, Boijmans Studies. The first two chapters describe the discovery of The Supper at Emmaus, five other ‘Vermeers’ and two ‘Pieter de Hoochs’. Important collectors such as D.G. van Beuningen and Willem van der Vorm bought several of these paintings for millions of guilders and even sold parts of their collections to finance the purchases. The third and fourth chapters deal with Han van Meegeren. Immediately after the Second World War he was accused of selling a painting by Vermeer to the Nazi official Hermann Göring. In order not to be accused of collaboration, Van Meegeren confessed that he had painted the work and several other ‘Vermeers’. These chapters also detail how Van Meegeren marketed his forgeries and illuminate his extraordinary technical abilities. The final chapter attempts to provide an answer for how Van Meegeren was able to fool the entire museum world.

The new Boijmans Studies ‘Van Meegeren’s Vermeers. The Connoisseur’s Eye and the Forger’s Art’ is available via webshop.boijmans.nl and from the museum shop for € 22.50. The authors are Friso Lammertse (curator of Old Masters at Museum Boijmans Van Beuningen), Nadja Garthoff (art historian), Michel van de Laar (conservator at the Rijksmuseum) and Arie Wallert (scientific researcher at the Rijksmuseum).

Which objects in Han van Meegeren’s The Meal at Emmaus unmasked the famous forgery?
You can find the answer at alma.boijmans.nl. 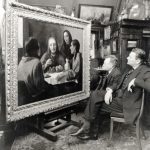