Vermeer’s Girl with a Pearl Earring, a favourite of visitors to the Mauritshuis, will be on display a month longer than originally planned in The Hague. The painting will be on display in the Prince William V Gallery, situated on the Buitenhof in the centre of The Hague from 3 to 25 April 2012.

The Prince William V Gallery is a unique location in the Netherlands where you can see how a princely collection was presented in the eighteenth century: in a long, high room the walls of which are covered from floor to ceiling with paintings. After a month in the Gallery, the Girl with a Pearl Earring will exchange these regal surroundings for the modern architecture of Berlage: for several weeks the painting will be part of the presentation Masterpieces from the Mauritshuis – At the Gemeentemuseum in The Hague starting on 28 April 2012.

The Girl with a Pearl Earring is hugely popular, both in the Netherlands and abroad, due in part to the eponymous book and film. The painting – along with other highlights from the museum – will go on tour to Japan and the United States in 2012 and 2013 as a result of the upcoming extension and renovation of the Mauritshuis.

The Prince William V Gallery, which reopened in 2010, contains works by such Dutch and Flemish masters as Steen, Potter, Van Mieris, Van Honthorst and Rubens. The Gallery offers an image of the collection of paintings owned by Stadholder-Prince William V (1748-1806). The Gallery can be visited separately or in combination with the adjacent Museum de Gevangenpoort (Prison Gate Museum). 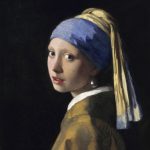