The National Gallery of Art acquired its first work by Caspar Netscher, A Woman Feeding a Parrot, with a Page. The painting has made its US debut in the exhibition Drawings for Paintings in the Age ofRembrandt (until 2 January 2017) as one of fewer than ten works by the artist on public view in the country. In addition, the painting is shown for the first time alongside a drawing from the British Museum that Netscher made after the painting. The museum also acquired an Imaginary River Landscape by Herman Saftleven, which is dated 1670.

Information from the museum, 24 October 2016

Signed and dated "CNetscher. Ao. 16.66," A Woman Feeding a Parrot, with a Page (1666) is one of Caspar Netscher’s finest genre paintings. It depicts an elegant young woman wearing a gold-colored dress with split sleeves who gazes out at the viewer as she feeds an African grey parrot. The woman and an attentive pageboy holding a silver tray both stand behind an illusionistic stone niche with a bronze-colored silk curtain pinned to the side. An oriental carpet spilling out over the bottom ledge adds to the illusionism, as it partially obscures roman numerals that appear to be carved into the stone. Netscher was an outstanding portraitist as well as a master of depicting the social interactions of the Dutch elite. He developed an exquisite painting technique that allowed him to imitate a wide range of textures, such as the linen, satin, and rough nap of an oriental rug featured in this work. A Woman Feeding a Parrot, with a Page was purchased with funds from The Lee and Juliet Folger Fund.

Imaginary River Landscape, monogrammed and dated 1670, is one of Herman Saftleven’s most charming and delicately rendered depictions of a meandering river valley. Despite the painting’s small scale, Saftleven harkens back to the expansive landscapes of Pieter Bruegel the Elder. The viewer looks down across the valley from a rocky outcrop, travelers move along mountain trails, shepherds watch their flocks, and traders tend to their vessels. The earthy colors and precise execution of the scene’s foreground elements morph into a more suggestive rendering of distant pictorial elements–walled towns, church towers, and villages situated along the river—bathed atmospherically in misty blues. This painting was purchased with funds from The Lee and Juliet Folger Fund. 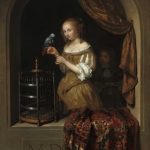 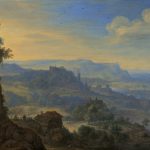