The Rubens House in Antwerp has acquired the altarpiece Saint Catherine by the Italian master Tintoretto. The work was the only work by an old master at an auction of the art of the British pop star David Bowie at Sotheby’s in London. Minutes after the auction, the new owner declared his intention to place the work on long-term loan to the Belgian museum. This gesture not only acknowledges the profound influence of Tintoretto and Venetian art on Rubens but also pays tribute to David Bowie’s life-long love of museums and generosity with loans.

The painting was commissioned in 1570 by the San Gimignano church in Venice, where it remained until the church was demolished in 1807. Anthony Van Dyck made a sketch of the work during his trip in Italy in the 1620’s and it served as an important source of imagination for Van Dyck.

Anthony Van Dyck (1599-1641), Sketchbook, above Madonna with the holy Dorothea, after Titian and below St Catherine with an angel after Tintoretto, ca. 1620-30, British Museum, London

Saint Catherine will go on show at the Rubens House next year. It is the first Tintoretto to go on show there ever. Antwerp alderman Philip Heylen: "The policies pursued by the Rubens House in recent years have convinced generous collectors at home and abroad to loan their work for a while to allow the public at large to admire them. The fact that this work formed part of the personal art collection of one of the greatest pop icons of all time shows how inspiring old masters can be for innovative artists." 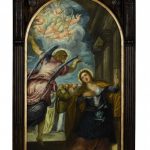 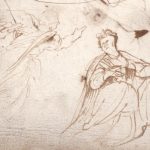