Recently, the London based art dealer Johnny Van Haeften decided to support CODART as a Maecenas through the Friends of CODART Foundation.

Johnny Van Haeften is the owner of Johnny Van Haeften LTD, the famous gallery specializing in Dutch and Flemish Old Master Paintings of the 16th and 17th centuries. The Van Haeften Gallery is the only gallery in London dealing exclusively in this field. Van Haeften, of Dutch ancestry, was born in 1952 in London and educated in England, at Eton. He joined Christie’s in 1969 and spent eight years there partly in the Press Office and partly in the Stamp Department; Johnny remains a keen philatelist. In 1977 he left Christie’s and set up Johnny Van Haeften Ltd with his wife Sarah whom he married the same year; their first gallery was in New Bond Street on the 3rd floor above Boucheron. In 1982 he moved to the present gallery at 13 Duke Street, St James’s.

Johnny is currently an Executive Committee member of The European Fine Art Foundation (TEFAF) and was until recently a member of the Reviewing Committee on the Export of Works of Art. About CODART, Johnny says: “this is a wonderful, essential and enthusiastic organization that deserves everyone’s support”.

Interested in friendship with CODART? Please contact Gerdien Verschoor, director of CODART, via gerdien.verschoor@codart.nl or check here for more information. 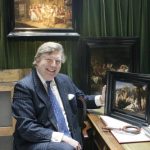