Update 16 August: According to the Los Angeles Sheriff’s Department the drawing has been recovered.

A 11-by-6-inch (appr. 28 x 15 cm.) pen-and-ink drawing The Judgment by Rembrandt, valued at more than $250,000 has been stolen from a hotel in Marina del Rey, California. Authorities say a man working with accomplices is believed responsible for the theft late Saturday.

The drawing was stolen from an exhibit at a luxury hotel in Marina del Rey over the weekend in what authorities called a carefully planned heist.

After reviewing hotel surveillance footage, detectives believe the theft of the artwork from a private exhibit in the hotel was well orchestrated, Sheriff’s Department spokesman Steve Whitmore said.

The Rembrandt was part of an event in which art pieces are put on display for potential buyers. Whitmore said such exhibits are frequently held at the hotel. The drawing belongs to the Linearis Institute of San Francisco.

The drawing disappeared from the upscale hotel between 10:20 and 10:35 p.m. The theft occurred when a curator was distracted by another person, Whitmore said. It was unclear whether the person who caused the distraction was connected to the theft.

"The hotel has top-quality security," the sheriff’s spokesman said. "We believe this was a well-thought-out and well-planned theft."

Art experts said works by Rembrandt are among the most popular targets for art thieves, second only to those by Picasso, because of the artist’s name recognition and their value. Anthony Amore, chief investigator at the Isabella Stewart Gardner Museum in Boston and co-author of the book "Stealing Rembrandts," said there have been 81 documented thefts of the artist’s work in the last 100 years.

One of those took place at the Gardner museum where, in 1990, a pair of thieves posing as police officers gained entry to the museum and stole 13 pieces of art, including three Rembrandts. The crime remains unsolved.

But Amore said that case is an anomaly. In the great majority of cases, stolen Rembrandts have been recovered, either when thieves were caught or returned the items, sometimes in an attempt to claim reward money after they were unable to sell them. Thieves find famous artworks extremely difficult to sell because of the high profile of the pieces and the publicity generated by such thefts, he said. 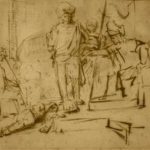