Information from the museum, 20 September 2010

Museums surely would like such occurrences to happen more often. Two paintings that were lost since the second world war were given back to the Staatliches Museum Schwerin by a private owner. The paintings are Interior of the Oude Kerk in Delft by Hendrick van Vliet from 1659 and Stream in winter (Dargun) by Marie Hager, from 1920.

Both paintings were in a private collection after the war, and curiously, both in one frame. The owner must have liked the landscape better then the church painting as he stretched the painting by Hager around the smaller work by Van Vliet. The "double painting" was placed in the frame of the 17th-century Dutch masterpiece.

Van Vliet was one of the leading architectural painters in Delft in the middle of the 17th century. At first he painted architectural fantasies, later only existing architecture, mostly the Oude Kerk and Nieuwe Kerk in Delft, but also churches in other cities.

The return of Interior of the Oude Kerk in Delft means a main work from the "Delft school" is on display in the museum in Schwerin. It will get its place between other good church interiors by Emanuel de Witte and Anthonie de Lorme. Of course the Delft school will be better represented in the museum, though it was already well covered by the excellent Sentry by Carel Fabritius. The works share the virtuoso rendering of perspective and the visible interest in light and shadow.

Buying such a work in today’s art market would certainly need a six digit price. The condition of the painting, which has not been restored since the 1930’s is satisfactory. Apart from a yellow varnish and a small rip in the canvas, the painting has been preserved well. 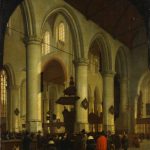 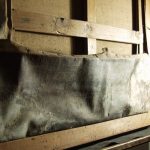