Last week CODART received the sad news of the passing away of Rob Smeets, founder of Rob Smeets Old Master Painting Gallery in Milan. We would like to express our condolences to his family and friends.

Rob Smeets was born in 1943, September the 27th, Maastricht, Netherlands. After conceiving a degree in sociology at the Tilburg School of Economics, he moved to Milan in 1971. In Italy he cultivated the interest for art that his parents transmitted to him since his young age. This passion coexisted with a brilliant career in the advertising industry until 1989 when Rob Smeets decided to merge his love for art and his entrepreneurial spirit and founded the Rob Smeets Old Master Painting gallery. In few years he established it as one of the most reputed Old Master Painting galleries in Europe.

Rob retired from the Old Master paintings business in 2008 leaving the direction of the gallery to his son Paul. He moved to Perugia where he started a contemporary art gallery: Le Gallerie dei Gerosolimitani. Rob Smeets passed away on 7 May 2014 after a long illness. 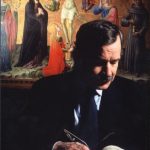