Professor Christopher Brown CBE has been awarded an Honorary Degree of Doctor of Letters yesterday at the University of Saint Andrews in Scotland. Brown became CODART-member as soon as 1998, still as the curator at the National Gallery in London. Soon he became director at the Ashmoleum Museum in Oxford, from which function he will retire as the director in September 2014, as was announced by the museum last week.

The laureation address, by Professor Brendan Cassidy of the School of Art History, University of Saint Andrews is available on the univeristy’s website. 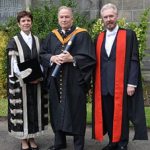