With great sadness we learned of the untimely death of Gregor Simoons on 20 July. Gregor was a passionate and expert frame maker who made authentic frames according to traditional methods. We would like to express our condolences to Gregor’s family, colleagues and friends.

In 2010-11 Gregor was responsible for the reframing of 18 paintings by Rembrandt and his contemporaries in the State Hermitage Museum in St. Petersburg with a 17th-century style frame. The spectacular results were exhibited in St. Petersburg from 9 December 2011 until 15 January 2012. Prof. Mikhail B. Piotrovsky, director of the museum called him "the greatest frame maker of the world." In our first eZine, Gregor spoke fondly of his passion for making frames. He will be dearly missed. 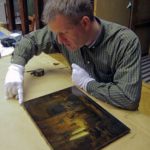