The City of Rotterdam has a new masterpiece. Today, on behalf of the City Council, Mayor of Rotterdam, Ahmed Aboutaleb took receipt of Boijmans’ most costly old-master acquisition since 1958. The 15-century painting has been purchased following extensive research and with generous funding from important private and public foundations. From today the artwork has a permanent place in the museum and the national collection.

A masterpiece of panel painting from the period before Jan van Eyck, a triptych showing the Embalming of the Body of Christ, has today been added to the collection of Museum Boijmans Van Beuningen. The painting has been acquired thanks to a ‘leading gift’ from the Rembrandt Association and the Mondriaan Fund. Generous contributions have also come from the Prins Bernhard Cultuurfonds (Breeman Talle Fonds), VSBfonds, SNS REAAL Fonds, the BankGiro Lottery and the Museum Boijmans Van Beuningen Foundation. Scholarly art-historical research by Boijmans curator Friso Lammertse and Stephan Kemperdick, curator at the Gemäldegalerie in Berlin, led to the discovery of the previously unknown painting in a private collection. Lammertse: ‘It is exceptional that a totally unknown painting from this period should come to light, and even more extraordinary that it should be available for acquisition by the museum. The right-hand panel with Saint John the Baptist is among the most beautiful surviving Netherlandish paintings from around 1400.’

No other Dutch museum (not even the Rijksmuseum in Amsterdam) has a group of 15-century Southern Netherlandish paintings by masters such as Jan van Eyck, Hieronymus Bosch, Dieric Bouts and Hans Memling. It is of great art-historical importance that this new acquisition can be permanently displayed in Rotterdam alongside the only Van Eyck in a Dutch collection and the extremely early Norfolk Triptych.

In 1958 the museum purchased the large and important collection of D.G. van Beuningen for 13 million guilders, including masterpieces such as the Tower of Babel by Pieter Bruegel the Elder, and works by Vincent van Gogh and many others. One of the most expensive purchases in the museum’s recent history is a painting by the 16th-century landscape painter Cornelis van Dalem, acquired seventeen years ago for more than 2 million guilders. Since then the museum has acquired old masters sporadically and only when the work can be permanently displayed. To safeguard the exceptional quality of the museum’s collection, only world-class works such as the new triptych stand a chance in the ‘fight for a space on the wall’.

Triptych with the Embalming of Christ

The central panel of the triptych shows the embalming of the dead body of Christ, a rarely depicted scene. According to an international group of experts, the work was painted by an unknown master around 1410 in Bruges. Only 20-30 paintings made in this period in the Netherlands have survived. Through comparison with drawings and manuscripts from the period before Van Eyck, and the manner in which the embalming is depicted, the experts have no doubts about the origin of the painting. The depiction in the left-hand panel of Saint Anthony, the patron saint of the sick, suggests that the triptych may have been commissioned by a hospital. The painting is in good condition; only the figure of Christ has suffered some damage, possibly from being touched by the faithful.

Following the successful exhibition ‘The Road to Van Eyck’, which the museum organised last year and where the triptych was shown for the first time, the Rembrandt Association decided to contribute €600,000 to establish an acquisition fund for the triptych. Thanks to the contributions, gifts and bequests of the members of the Rembrandt Association it was soon possible to secure the work and thus enrich the nation’s collection. The acquisition of the work has been made possible with substantial additional funding from the Mondriaan Fund, the Prins Bernhard Cultuurfonds (Breeman Talle Fonds), the VSBfonds, the SNS REAAL Fonds, the BankGiro Lottery and the Museum Boijmans Van Beuningen Foundation. The partnership of private foundations such as the Rembrandt Association and public funding bodies such as the Mondriaan Funds is highly unusual, and it is exceptional for public money to be invested in a museum acquisition. 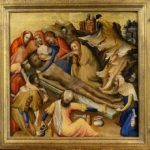