Anyone who knows long-time CODART member Hana Seifertová, curator of Dutch and German painting of the 17th and 18th centuries at the National Gallery in Prague, would hardly believe that 12 May 2004 is her 70th birthday. 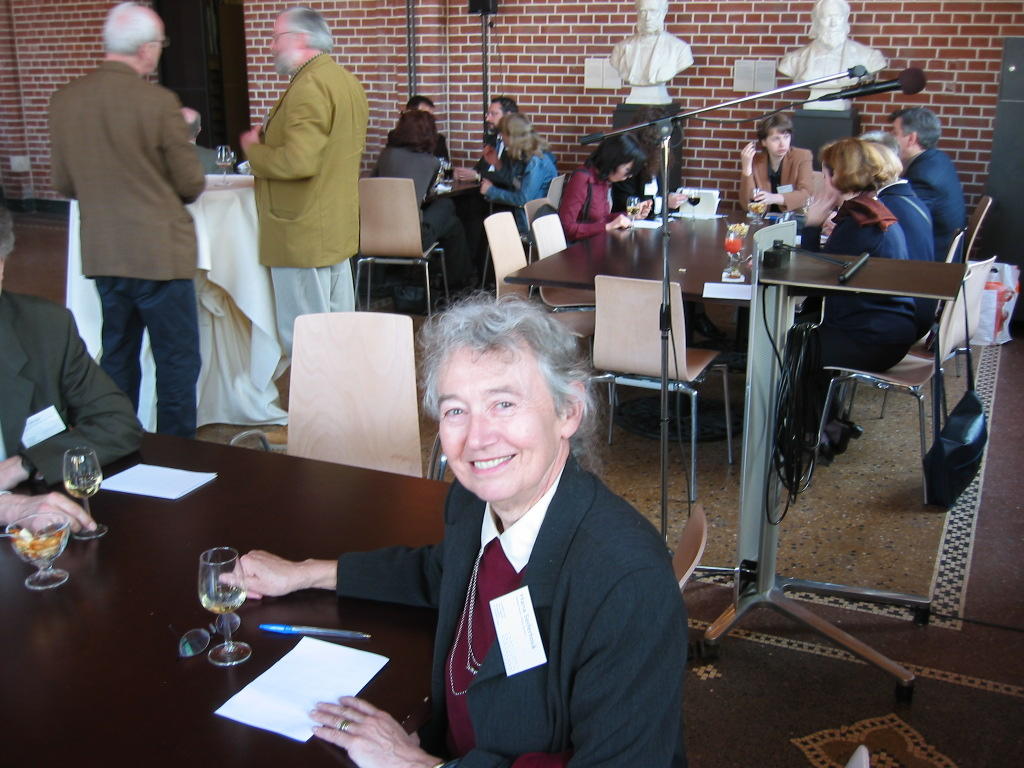 Hana Seifertová at the closing reception of CODART ZES in the Rijksmuseum, 18 March 2003

I am not going to recount her whole (long) professional curriculum vita or recite her complete list of publications, but I would like to mention a few episodes and milestones in her life. I will focus on crucial moments in her carrier, moments that reveal her as both an outstanding specialist and an exceptional woman. In this way, everyone can come to understand why Hana is so respected and loved, both at home and abroad. As I have known her for almost 20 years, I can say she is hard working and maintains a strict discipline – and this is what she expects from everyone else, too. At the same time, she is a cheerful, warm-hearted and charming person, who loves meeting friends and giving parties.

Dr. Hana Seifertová studied the history of art and history at the Charles University in Prague from 1955 to 1958 and received there her doctorate in 1967. Her dissertation explored the work of Kaspar Jan Hirschely and the origins of Baroque still-life painting in Bohemia. Having just graduated from university she was appointed director of the Regional Gallery in Liberec in 1958. In the 1950s Liberec (formerly Reichenberg) was a rather gray and devastated city in northern Bohemia. Hana, with all her ability, enthusiasm and the aid of her husband, sculptor Jiří Seifert, started to build a permanent collection for the museum and to organize exhibitions of modern Czech art. She focused on contemporary Czech sculpture, inviting ‘unofficial’ artists – those not always easily tolerated by the Czechoslovak regime of the time – to show. Among others, she arranged the first open-air sculpture exhibit in Czechoslovakia (1964); a very well received show of contemporary Austrian sculpture; and the project Sculpture and the city, which put a variety of work on display in the streets of Liberec (1969). In addition, she created a small but important collection of Dutch and Flemish paintings of the 17th and 18th centuries. Hana wrote a number of important articles and catalogues, both on contemporary art and Old Masters painting (she was, for example, a regular contributor to Oud Holland in the 1960s). In a word, under her leadership and in the rather liberal atmosphere of the late 1960s the Regional Gallery became an important art center outside Prague. More and more visitors came (among others, Horst Gerson, then director of RKD, and even Václav Havel). The museum’s activities were highly acclaimed in western European media: the Frankfurter Rundfunk, for example, devoted an extensive broadcast to the aforementioned Sculpture and the city show. However, when the Prague Spring was brought to an end with the invasion of Soviet troops in August 1968, Hana´s career in Liberec ended too. She, like so many intellectuals around the country, was dismissed from her post.

Hana went back to Prague. For a time she worked at the Institute for the Theory and History of Art. In 1971 she obtained a position at the National Gallery in the European Old Masters department. At the time, all contact with foreign (especially western European) institutions was strictly forbidden. Nevertheless, Hana continued her research, publishing on Georg Flegel, Lucas Valckenborch and Baroque still-life painters in Bohemia. In 1988 she was named head of department, and remained in charge until 1997. She would then have been eligible for retirement, but the National Gallery hired her as part-time curator of Dutch and German painting of the 17th and 18th centuries. Over the years Hana Seifertová planned and executed a number of important projects, a few of which I will list here. In 1993-94 she worked on an exhibition of her favorite painter Georg Flegel. This magnificent show of Flegel’s still lifes, which she curated together with Kurt Wettengl of the Historisches Museum in Frankfurt, was shown at the Schirn Kunsthalle (Frankfurt) and in Prague Castle. Furthermore, she (together with Anja K. Ševčík) put together a long-term exhibit of Dutch art of the 17th and 18th centuries entitled …et in Hollandia ego… that was on display in Moravská Třebová from 1998 to 2003. She prepared (again with Anja) the exhibition Dialog mit Alten Meister: Prager Kabinettmalerei 1690-1750 for the Herzog-Anton-Ulrich-Museum in Braunschweig (1997), which explored the influence of Dutch and Flemish still lifes of the 17th century on Prague painting of the 18th. Her previous involvement with the museum in Liberec has resulted in a catalogue of Dutch painting of the 16th to 18th centuries from the collection of the Regional Gallery (1995). Hana co-authored this catalogue together with Lubomír Slavíček. Recently, she curated an exhibition of Dutch and Flemish still-life painting from the National Gallery shown in Liberec and Cheb. She has written contributions to many exhibition catalogues, among them Gärten und Schlösser der Rubenszeit (Hamm and Mainz, 2000-01) and Johann Heiss (Friedrichshafen, 2002-03). Along with countless articles (published in Revue de l´Art, Oud Holland, the Wallraf-Richartz Jahrbuch, Bulletin of the National Gallery in Prague, Umění, etc.), Hana has given numerous papers and lectures around the world.

Hana has been able to continue her work despite the fact that her house in Řevnice, near Prague, was heavy damaged in the floods of August 2002. I admire her energy, ability, knowledge and connoisseurship, which she is always willing to share with other colleagues, particularly with young art historians and students. Since beginning my work at the National Gallery with Hana as my boss, I have learnt an immense amount from her – not only about our profession. I have also learned from the wonderful, very open way she treats her colleagues and museum people in general. I hope that Hana will stay with us as long as possible, working as hard as she always has.