The City of Leuven, M – Museum Leuven, KU Leuven and Illuminare – Centre for the Study of Medieval Art (KU Leuven) are commemorating the life of Veronique Vandekerchove, Chief Curator of M – Museum Leuven from 1998 to 2012, on Friday, 29 June.

Veronique Vandekerchove was the driving force behind Leuven’s landmark museum. She died following a traffic accident on 25 January 2012. Veronique put Leuven firmly on the international museum map and in doing so contributed fundamentally to making the city a more attractive and dynamic place. She also played a crucial role in fostering the good working relationship between the city and the university.

For her outstanding cultural merits, Professor Mark Waer, Rector of KU Leuven, is conferring the high KU Leuven distinction of Clavis Terrarum on Veronique Vandekerchove posthumously. It is the first time that this distinction has been awarded. Clavis Terrarum is a sculpture in bronze designed by Fred Bellefroid.

M – Museum Leuven is dedicating the gallery displaying the late-Gothic sculpture collection to Veronique’s memory. This room was chosen in consultation with her family and architect Stéphane Beel. A commemorative plaque will have a place of honour at the start of the museum tour.

The City of Leuven is establishing the Veronique Vandekerchove Chair of the City of Leuven at KU Leuven. It is the first time that the city has undertaken an initiative of this kind. The endowed chair represents a sum of 65,000 euro per year and will provide financial support to young art historians participating in scientific research in line with Veronique Vandekerchove’s work.

Illuminare – Centre for the Study of Medieval Art (KU Leuven) is publishing the proceedings of the Rogier van der Weyden in Context international symposium (2009), which was hosted and co-organised by Veronique Vandekerchove. The book, which contains contributions from researchers around the world, is dedicated to her.

You are cordially invited to the commemoration ceremony on Friday, 29 June at 5:00 pm in M – Museum Leuven. 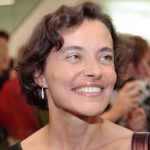