During a small ceremony in New York on 7 August 2017, Ronni Baer received a Royal decoration and was appointed as Knight in the order of Orange-Nassau for her influence on international promotion and the study of Dutch Art, the Dutch Masters in particular and for her leading role in maintaining the artistic and inter-museum relations between the Netherlands and the USA.

For an exhibition about Spanish art during King Philips III, Ronni Baer was appointed Commander in the Order of Isabella the Catholic (Spain). Ronni Baer developed various exhibitions about Dutch masters and brought them to a big audience.  Her latest exhibition Class Distinctions in the Age of Rembrandt and Vermeer in 2015, which was opened by the Dutch Princess Beatrix,  can be considered as one of the highlights of her efforts to put the Dutch masters on the map in the United States. 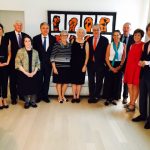