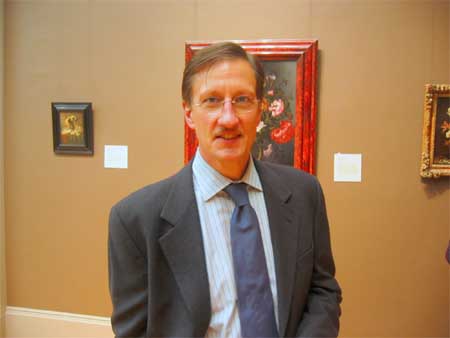 Information from the Netherlands Ministry of Foreign Affairs

On Monday, September 10th, a dinner was offered by Accenture to the Metropolitan Museum of Art in honor of the opening of the exhibition The age of Rembrandt. On that occasion the following speech was delivered by the consul-general of the Netherlands in New York, Hugo Gajus Scheltema.

Only a week after my arrival as the new Dutch consul-general in New York I met with Walter Liedtke. He was preparing the magnificent show of Old Master paintings that is being opened today and I wanted to greet him in advance of this evening. After showing me around, while walking back towards the entrance, we passed the Early Netherlandish paintings. At that point Walter asked me whether I thought it politically correct to call paintings from what is now Belgium Netherlandish. I could only answer that these lands formed part at the time of the Spanish Low Countries – whether we liked it or not. Actually, to make matters worse, in the Netherlands these paintings are usually known as ‘Flemish primitives”!

I am mentioning this not to tease my Belgian friends but for another reason, namely to remind ourselves that those early works showed how much the Dutch Golden Age of painting of the 17th century had been preceded and influenced by other schools, both nearby and further away, and how extraordinary it was that this creative explosion of visual art rather swiftly became concentrated in a few towns in the newly independent Netherlands: Amsterdam, Leiden, Haarlem and Delft of course, and a number of more distant ones, such as Dordrecht or Zwolle. For about a century this focussed and productive energy continued, only to disperse again to other areas and countries, and later even crossing the oceans. And indeed, at the beginning of that Golden Age the Dutch may have founded the very town of New York where we are today, but it took a couple of centuries for people such as Mondriaan and de Kooning to discover it. I hope, by the way, that when we will celebrate together in 2009 the quadricentennial of Henry Hudson’s voyage, there will be many occasions and ways to commemorate these historical and modern trans-Atlantic links.

It has been in turn Walter Liedtke who helped Americans discover Dutch art. To paraphrase Jim Morrison, he “lit their fires” and has thus become a true ambassador of Dutch Old Master paintings in the USA. The Metropolitan collection, which is so complete here today, of course helps, but it takes a truly inspired curator to safeguard, display and above all describe the wealth of Dutch paintings in this wonderful museum.

The passion and dedication with which Walter takes care of our cultural heritage is extremely important to my country and especially to H.M. Queen Beatrix, whom he met a few times. The experts she consulted confirmed her impression of Walter’s personal dedication, vision and high standards of excellence. These qualifications of the Kappittel, her advisory board, happen to form the very criteria for a royal decoration and therefore, Walter, I am glad to announce that Her Majesty has decided to appoint you officer in the order of Orange- Nassau. The dinner tonight, in honor of the opening of The age of Rembrandt, seemed to be the perfect occasion to give you this important decoration, and therefore, by the powers vested in me by Her Majesty Queen Beatrix of the Netherlands, I have the honour to appoint you officer in the order of Orange-Nassau.

In 1993, King Albert II of the Belgians named Walter Liedtke a knight in the order of Leopold.