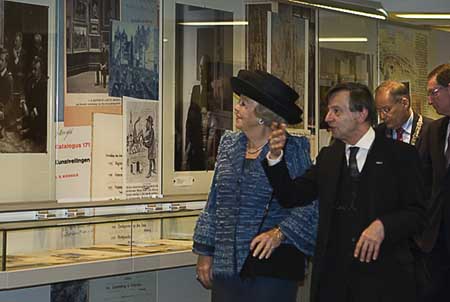 On Friday morning, 14 September, Her Majesty Queen Beatrix opened the new quarters of the Netherlands Institute for Art History, the RKD. At a ceremony in the auditorium of the Royal Library, in the same building as the RKD, speeches were given by Rudi Ekkart, director of the RKD, Frits Duparc, director of the Mauritshuis, and, in the name of Minister of Culture Ronald Plasterk, Judith van Kranendonk, Director General for Culture and Media of the Netherlands Ministry of Education, Culture and Science. Following the talks, the queen pushed a button on a computer, launching a computer presentation on a newly acquired letter by Piet Mondrian. At the ceremony, it was also announced that the RKD had acquired the archive of the late Mondrian specialist Robert Welsh.