Els Stronks, "Never to Coincide: the Identities of Dutch Protestants and Dutch Catholics in Religious Emblematics"
This essay presents observations on the distinctiveness of Protestant and Catholic literary practices and identities in the seventeenth-century Dutch Republic.

Virginie Spenlé, "“Savagery” and “Civilization”: Dutch Brazil in the Kunst- and Wunderkammer"
Focusing on a hitherto unknown coconut cup from Dutch Brazil, this essay discusses Count Johan Maurits of Nassau-Siegen’s strategy for enhancing his reputation as governor-general of Brazil through collecting exotic objects; it also argues that such examples of “brasiliana” underwent a connotational paradigm shift in the hands of later owners.

Renée Kistemaker, "Between local pride and national ambition: The “Amsterdam Museum” of the Royal Dutch Antiquarian Society and the new Rijksmuseum"
Between 1876 and 1884, prior to the opening of the new Rijksmuseum in Amsterdam, tensions arose between those who saw the conservation and presentation of the city’s art and historical collections as a matter of local pride and those whose goal for these objects was to place them in a context that furthered national ambitions. 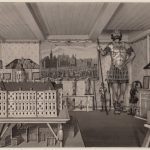