The Royal Museums of Fine Arts of Belgium organise an international Symposium under the direction of Ingrid Goddeeris and Noémie Goldman. This Symposium devoted to the figure of the “animateur d’art” will take place in the autumn of 2012.

What does the term “animateur d’art” mean? A driving force on the artistic scene, a person who facilitates the development of the art in all its shapes. We are proposing this first formula which describes the kind of persons we would like to study: "The animateur d’art is an amateur who actively participates in the defence of the arts and in the stimulation of the artistic creation in a certain period. He puts his numerous networks to work in order to spread ideologies and aesthetics through the cultural environment and the society. He is a key figure positioning himself as a mediator between the different art worlds – the plastic arts, the literary milieu, the musical and theatre scene – as well as between the different agents of the cultural environment (dealers, galerists, editors, artists,…). His work consists in building bridges between the artists and his own cultural environment in order to ease the reception of the works and to promote a peculiar aesthetics”.

Within the artistic circle this all-rounder always fulfils several functions and doesn’t limit himself to one single action field. The animateur d’art can organise exhibitions, he can be a review editor, he can play the part of go-between in the artworks auctions, he can be a businessman, a sollicitor, a writer, a collector, a.s.o. His different "hats" place him in the centre of the interactions between the artistic, literary, economic and sometimes political circles. And finally his international networks often make of him an ambassador in the artistic circles of other capitals.

In his general conclusion of his work Les élites de la République 1880-1900 (Fayard, 2006), Christophe Charle makes the searchers aware of the necessity to study some particular figures (our translation): " [those] conclusions should demand other additional research, namely about the social groups in charge of a mediation function between the fields (liberal professions, journalists, editors, review directors, officials of the representation apparatus of the diverse classes emerging during the Belle Epoque) or about the peculiar configurations of the elites according to their sphere of spatial influence". The animateur d’art, who can be described as one of those cultural mediators, because he is in touch with so many different domains and creates links between numerous sections of the society, is thus undoubtedly a fundamental subject to study. The animateur d’art, often acting in the shadow, seems invisible although he actually is omnipresent. This fact explains the general lack of knowledge about those versatile figures and the necessity to initiate targeted studies in order to determine their action field in its globality.

The contributions to this Symposium will explore this story of the animateur d’art while proposing studies devoted to personalities of the artistic circle corresponding with our, possibly enlarged, definition of the animateur d’art. We are expecting propositions in connection with studies devoted to persons active in the development of the artistic, musical or literary milieu. In parallel with these historical contributions sociological analyses of these operators are also wished in order to deepen the theoretical study of those personalities. So we hope to lift the veil from those persons acting in the wings of the artistic scenes of which the – up to now – too modest study doesn’t unveil the actual impact of their work in the development of the art in our societies.

Interested persons have to submit their proposal of maximum 500 words before the 15th of September 2011.

The summaries must be accompanied by a short curriculum vitae of 5 lines maximum.

The communications must be addressed to the organising committee:
Ingrid Goddeeris & Noémie Goldman
animateurdart@fine-arts-museum.be
phone : 00 32 2 508 33 20 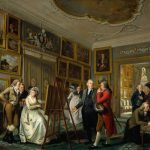