Two paintings thought to be works of Hieronymus Bosch are likely to have been imitations painted around the same time, Dutch media reported on Saturday.

The works Christ Carrying the Cross (ca. 1515-16, Ghent) and The Seven Deadly Sins (ca. 1500, Madrid) "were made at the same time, but were likely to have been made by imitators" public news broadcaster NOS said. This was concluded after years of research by the Bosch Research and Conservation Project (BRCP), which have been studying and documenting the early Dutch master’s works since 2010.

Researchers were able to compare the paintings using infrared reflectography, ultrahigh-resolution digital macro photography and other modern techniques, the BRCP stated on its website. "Together with the microscopic study of the paintings, all of this enabled us to write extensive research reports detailing the conditions of the works". The project’s team includes researchers from the Rijksmuseum, Radboud University in Nijmegen and the University of Arizona in Tucson.

See also the article Scanning for the truth in the Queen’s Gazette of Queen’s University.

The BRCP also attributed a new drawing to Hieronymus Bosch. The Dutch newspaper, de Volkskrant, reports that the privately owned drawing of a hell landscape is thought to be authentic. According to Matthijs Ilsink of the BRCP, the monsters in the drawing resemble much of the Master’s style seen on the right panel of the Garden of Earthly Delights in Madrid.

The drawing will be shown in the 2016 exhibition Visions of a Genius at the Noordbrabants Museum in Den Bosch. 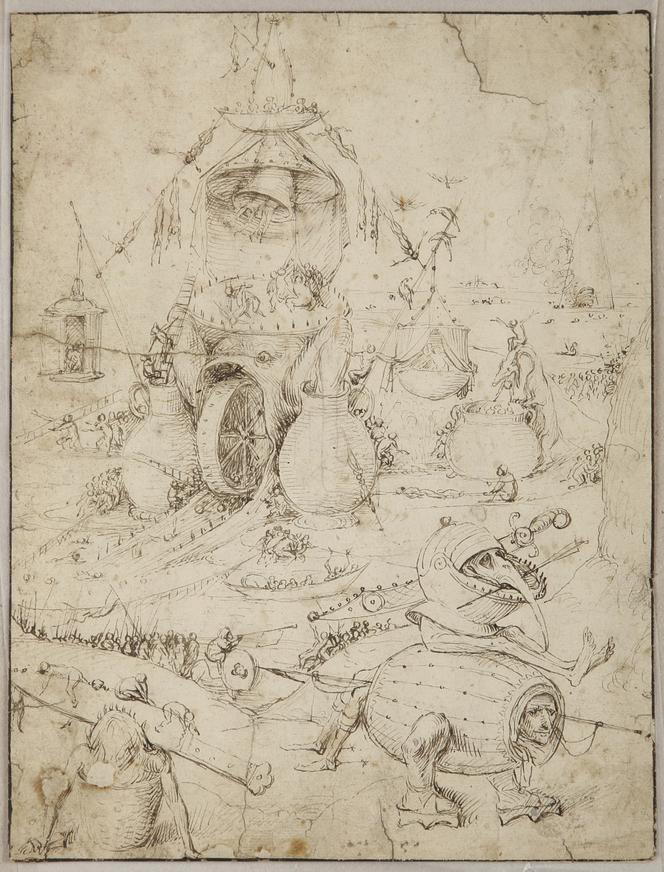 The drawing of the landscape in hell shows a bizarre scene filled with fantastical monsters and diabolical beasts. Because of the size of the sheet and the richness of the spectacle, this drawing forms an exceptionally important addition to the artist’s body of drawings. The drawing is virtually unknown: it was auctioned in 2003 by an unknown source and has been part of a private collection ever since.

The landscape is crowded and chaotic, threatening and frightening, just as Bosch imagined hell to be. In the centre of the composition, countless lost souls are caught in a large fishing net and are fed through a kind of water wheel into the mouth of a hellish monster. Human figures hang like clappers from ringing bells, a dragon spews souls from its mouth into a cooking pot, naked sinners sit on a sharp blade of a knife and a creature in the shape of a barrel walks on legs. It is a visual spectacle that we have started describing as ‘Boschian’ and which we also encounter in Bosch’s paintings with hell scenes, such as The Garden of Earthly Delights and The Last Judgement triptychs.

Remarkably enough, precisely that characteristic of the drawing, namely that it is so Boschian, is used by some as an argument against attributing the drawing to Bosch. The scene, they say, is a pastiche, made by an employee or pupil of an artist who would have worked in the atelier of Bosch. Nevertheless, after meticulous study of the drawing and after comparing it with other drawings and paintings by Bosch, Matthijs Ilsink, as an expert on drawings and together with the entire research team of the BRCP, has concluded that this is not the work of an imitator or a pupil, but concerns a drawing created by the master himself.

The quality of the drawing as a whole and the many distinctive details, for instance the figure with the helmet sitting on a barrel with legs, with in it another human figure, is nothing less than magnificent. The drawing gives us a fascinating insight into the methodology that Bosch used to compose images, namely very associative and additive. The artist created his own fantasy world, which he was able to display on paper as a self-evident reality. Here he goes to work in exactly the same manner as with the arrangement of the hell panel of The Garden of Earthly Delights, probably the most famous scene from hell of Western art.