Ingrid Ciulisovà, Researcher at the Slovak Academy of Sciences’s Institute of Art History in Bratislava has published Men of Taste. Essays on Art Collecting in East-Central Europe, a collection of four case-studies of collecting in Bratislava and around from the 18th to the 20th century. The essays are all concerned with a different collector Duke Albert of Saxe-Teschen, Count Pálffy, Karl Kuffner and Enea Grazioso Lanfranconi and Count Antoine E. Seilern.

The volume as a whole gives a coherent story of art collecting in East-Central Europe and gives context to the provenance of a great number of art works, among them many Dutch and Flemish. 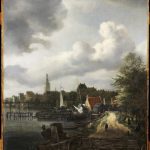