Christie’s announces that it will auction Saint Praxedis by Johannes Vermeer at its upcoming Old Master & British paintings evening sale on 8 July in London. Vermeer’s authorship of the painting has been a matter of debate after since its first attribution to the Delft master in 1969. Research by the Rijksmuseum now confirms at least the painting to be Dutch and suggests that the same batch of paint was used for Vermeer’s Diana and her companions in the Mauritshuis in The Hague. A full catalogue note of the painting is available on the auction house’s website

From the Christie’s press release

Christie’s is thrilled to announce the sale of Saint Praxedis by Johannes Vermeer of Delft (1632-1675), from 1655, which is the earliest dated picture by the artist and one of only two from his rare oeuvre to remain in private hands (estimate: £6-8 million, illustrated above). The results of recent material technical analysis conducted by the Rijksmuseum in association with the Free University, Amsterdam endorses Vermeer’s authorship of the picture. They establish not only that the lead white used in the paint is consistent with Dutch painting and is incontrovertibly not Italian; they also reveal a precise match with another established early painting by Vermeer – Diana and her Companions, in The Mauritshuis, The Hague. The match even suggests that the exact same batch of paint was used for both paintings. Offered from The Barbara Piasecka Johnson Collection with Proceeds to Benefit the Barbara Piasecka Johnson Foundation, this magnificent painting will be offered in Christie’s Old Master & British Paintings Evening Sale in London on 8 July, offering one of the rarest and most alluring opportunities for collectors and institutions this season.

The spectacular recent scientific evidence that endorses the Johannes Vermeer (1632-1675) attribution of Saint Praxedis is a significant art historical development and makes this work one of the stars of the summer sales. One of only two works by the artist to remain in private hands, this striking picture is one of the earliest known works by Vermeer; signed and dated 1655 it was painted when the artist was 22 or 23. Two other major history paintings by the artist are datable to the same period: Christ in the House of Mary and Martha (National Galleries of Scotland, Edinburgh) and Diana and her Companions (The Mauritshuis, The Hague). These three pictures together represent the early phase of the artist’s career before he evolved the modern style for which he is best known. Saint Praxedis was attributed to Vermeer for the first time in 1969 and was fully included in Vermeer’s oeuvre in 1986. Mrs Johnson, characteristically, moved quickly to seize the opportunity to acquire it less than a year later. Saint Praxedis appeared in the seminal monographic exhibition of Vermeer’s work held at both The National Gallery of Art, Washington and The Mauritshuis, The Hague, in 1995-96, and most recently in the Vermeer exhibition held at the Scuderie del Quirinale in Rome in 2012/13.

An addition to a small group of works showing the young artist’s response to contemporary Italian painting, the picture shows Vermeer copying a composition by the Florentine Felice Ficherelli (1605-c.1669). Vermeer has, however, subtly recreated in his own style the Saint’s head into an image of sweet piety, and shows her grasping a crucifix on which she meditates while squeezing a sponge soaked in martyr’s blood into a ewer. Praxedis was a Roman Christian from the second century A.D. who made it her mission to care for the bodies of those who had been martyred for their faith. The emotional subject of the picture and its Italian links held a special appeal for Mrs Johnson.

An art connoisseur whose dedicated collecting was underpinned by art historical training in Poland, where she was born, Barbara Piasecka Johnson (1937- 2013) was also a humanitarian and philanthropist. Having married J. Seward Johnson (1895 -1983), son of one of the co-founders of the Johnson and Johnson medical and pharmaceutical firm, in 1971, Mrs Johnson and her husband acquired many masterpieces together, and she also established the Foundation that bears her name today. Throughout her life she was sustained by a strong religious faith; her veneration of Saint Francis was reflected in many of her finest acquisitions and also fuelled her extensive charitable work which was recognised with many prestigious awards. She was passionate about Italian art and Italy, and her collection reflected this, highlighting the illustrious history and quality of the works and the vision Mrs Johnson showed in her choices. 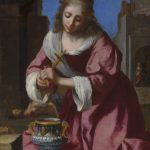