Call for papers for Art on the Move. Cultural Transmission and Artistic Exchange in the Low Countries, 1572-1700, a conference to be held 10-11 April 2014 in Museum Boijmans Van Beuningen in Rotterdam.

Information from the organizers, 1 May 2013

During the seventeenth century the market for visual arts flourished in the Dutch Republic, ranging from cheap prints to top-quality paintings. Meanwhile the Southern Netherlands experienced an “Indian summer”, pouring out tapestries, paintings, sculptures, books and musical instruments. Both artistic centres have been studied extensively, but mostly as separate entities. For example, the movement of artists has never been systematically mapped, just as very little is known about the trade in art objects and the exchanges in artistic styles between both regions. The aim of this conference, therefore, is to identify and explore the artistic dialogue between the Southern Netherlands and the Dutch Republic.

The first step is to map the artistic exchanges in both directions. We invite proposals focusing on three key areas: the circulation of artists, art works and artistic styles. Did artists move for religious, economic or familial reasons? Why were some destinations more popular than others? How did artists adapt to local markets and guild practices? What was the intensity and scope of the art trade? How did art dealers shape artistic practices and tastes? To what extent did the circulation of art and artists lead to innovations in motifs, styles and techniques? Secondly, we welcome contributions dealing with the wider implications of such exchanges for the history of art and culture in the Low Countries. For example, what impact did the circulation of people and art works have on the art market? Did it stimulate the growth of creative industries, and did it give rise to a new artistic culture? To what extent did the Low Countries share a same cultural heritage? Finally, we invite proposals that address these questions from a comparative perspective, by focusing on the artistic exchanges between the Low Countries and other regions, for example England, Germany or Spain.

Proposals for 20-minute papers, consisting of a short CV and an abstract of no more than 300 words (preferably all in a single file), should be submitted by email before 15 June 2013 to David van der Linden: vanderlinden@eshcc.eur.nl

This conference is organised by the NWO-funded research program “Cultural transmission and artistic exchange in the Low Countries, 1572-1672”, led by Filip Vermeylen (Erasmus University Rotterdam), Karolien de Clippel (Utrecht University) and Eric Jan Sluijter (University of Amsterdam). For more information on the project and its team members, see: http://artistic-exchange.com/ 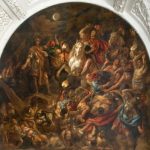