Information from the organizers, 7 June 2016

During the last decades of the 20th century, genre painting from the Netherlands has formed an important subject of the research, publications and exhibitions of several prominent art historians. Whereas the discours of the 1970s and 1980s focused largely on the possible (hidden) meanings in genre scenes and their presumed realistic character, the attention of scholars of the 21st century shifted towards other aspects of genre painting. During the past 15 years, many monographic studies on genre painters were published, for instance, and several exhibitions and symposia were organized in which also genre painting from the later 17th and early 18th century was studied to a fuller extent.

Currently, there is again a number of initiatives that focus on Dutch and Flemish genre painting: the Mauritshuis is preparing a catalogue on the genre paintings from its own collection and is putting together an exhibition of genre paintings from the British Royal collections. The RKD – Netherlands Institute for Art History is a collaborative partner in the project Vermeer and the Masters of Genre Painting, which will result in a travelling exhibition and a website on the artistic exchange between genre painters active in the third quarter of the 17th century.

Because of these occasions, the RKD, in consultation with the Mauritshuis, is organizing a symposium on the 16th of December, which will be fully dedicated to genre painting from the northern and southern Netherlands. We will reflect on the results of the research of the past decades and look forward towards future subjects, methods and approaches. Also, the symposium offers the opportunity for researchers to present the results of their research on genre painting in short lectures of 20 minutes. In addition to the presentations that are already scheduled, we specifically invite papers on the following topics:

Abstracts with a maximum of 500 words, including a short résumé, can be sent to: Ellis Dullaart MA, Curator Dutch and Flemish Old Master Paintings, e.dullaart@rkd.nl, before June 30th 2016. 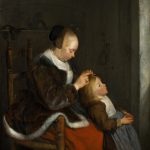