The State Hermitage Museum in St. Petersburg presented a painting last Monday that has been restored and authenticated as the work of Peter Paul Rubens. According to the Art Newspaper, the panel has been in the storage rooms of the Hermitage for over eighty years.

Information from the Art Newspaper, 6 June 2016

Catherine the Great gave the painting, The Resurrection of Christ (around 1610-11), as a gift to the Trinity Cathedral at the Alexander Nevsky Lavra, the most important monastery in Russia’s imperial capital. It was there until the Soviet government shut the cathedral down in 1934 as part of its anti-religious persecution. The nearly 5m by 3m painting was sent into storage at the Hermitage.

According to a press statement, only in 2012 did it become possible to uncover the painting and start the process of restoration at the museum’s newly-opened state-of-the-art Staraya Derevnya Restoration and Storage Centre on the outskirts of St Petersburg. The painting had become warped and darkened over the years. Clearing the canvas of extraneous layers uncovered the original painting, “the style of which fully corresponds to the artistic style of Rubens in the first few years after his return from Italy to Antwerp,” the statement says.

Mikhail Piotrovsky, the general director of the Hermitage, told Radio Baltika in March that “for many years this Rubens was regarded as a work by the artist’s school” and that upon cleaning and restoration it became clear “that it’s really a Rubens.”

The Resurrection of Christ will be on display at the Hermitage’s General Staff building on Palace Square through 2 October. 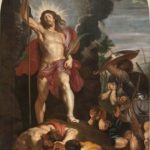