In relation to the project: In Search of Utopia, 1516-2016
Funding will be provided by the Veronique Vandekerchove Chair of the City of Leuven (KU Leuven)

With the following project outline:
Between 5 October 2016 and 15 January 2017 a major international loan exhibition is planned at M – Museum Leuven (Belgium) entitled In Search of Utopia, 1516. The exhibition is organized by the KUnST Leuven Foundation, M – Museum Leuven, and Illuminare – Centre for the Study of Medieval Art (University of Leuven). The curator of the exhibition and promoter of the research project is Prof. dr. Jan Van der Stock of the University of Leuven.

In 2016 it will be 500 years since Thomas More published his Utopia in Leuven with printer-publisher Dirk Martens. This anniversary is the occasion for the City of Leuven and the Leuven University to organize a prestigious exhibition which will illustrate several aspects of the exploration of ‘the world around 1516’.

Although the project starts with a tangible historical fact in Leuven – the first edition of the Utopia (1516) – the ‘search for Utopia’ is viewed from a broader perspective. Not only is the intellectual and cultural context in which the publication was created examined, but also the West’s particular fascination with distant, alien worlds. The image of the Earthly Paradise and a diversity of ideal dream worlds such as the Golden Age, the hortus conclusus, the Garden of Delights, the Land of Cockaigne and the representation of the New World are discussed in detail. The early 16th century’s artistic and playful search for the ideal human form and the perfectibility of man rounds off the quest. Was the dream ever within reach?

Chronologically, the exhibition spans the period from the end of the Middle Ages to approximately the middle of the sixteenth century. The horizons are Western Europe and the Western European world views. Illuminare – Centre for the Study of Medieval Art (KU Leuven) seeks a scholar to prepare a PhD on Northern Renaissance art from the first half of the 16th century in relation to the In Search of Utopia, 1516-2016 project.

The scholarship is destined for those with a university degree (MA) in Art History (Middle Ages – Early Modernity) whose areas of interest lie in research into Northern Renaissance art, the history of the Utopia, Thomas More, the history of the 16th century, exoticism, the ideal city, utopia-dystopia, …

The candidate will reside periodically in Leuven, Belgium. The In Search of Utopia, 1516-2016 project is supported by the Veronique Vandekerchove Chair of the City of Leuven (KU Leuven).

Funding will be provided by the Chair for the first year of the PhD project. During this year the candidate will have the opportunity to outline the project in order to apply for other grants.

All candidates are requested to send in the standard application documents (Curriculum Vitae, copies of degree certificates, a list of publications, two letters of reference from university/college lecturers) as well as a brief outline of their research project (max. 3 pages, plus timetable and bibliography) by 1 December 2012 to (e-mail is sufficient): 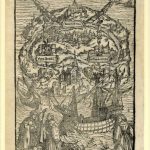